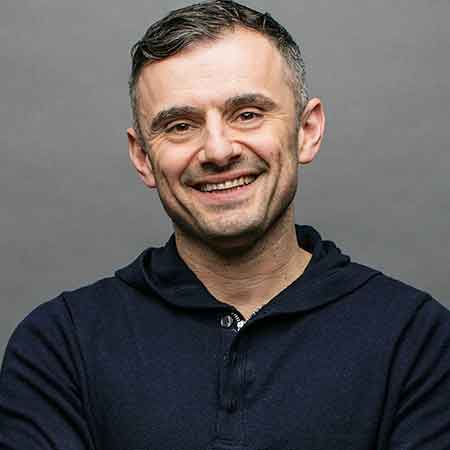 Gary Vaynerchuk is a  Belarusian American entrepreneur, author, and internet personality who was previously known as firstly known as a wine critic. Besides, he is also the owner of the Wine Library and was the host of his daily webcast Wine Library TV from 2006 to 2011. Moreover, he is also prominent for his work in digital marketing and social media.

Gary Vaynerchuk was born on November 14, 1975, in Babruysk, Belarus (then the Soviet Union). He was born to Sasha Vaynerchuk(Father) and Tamara Vaynerchuk(Mother) under the sign Scorpio. In 1978, Gary emigrated to the United States at age of three and lived in the studio apartment in Queens, New York along with eight other family members.

Later on, Gary and his family moved to Edison, New Jersy where he operated a lemonade-stand franchise. He joined his family's wine business when he was 14.

Vaynerchuk completed his high from North Hunterdon High school and graduated with a bachelor's degree in 1998 from Mount Ida College in Newton Ma s sachusetts.

Gary started working in father's store Shopper's Discount Liquor in Springfield, New Jersy. After working in his father business he changed the store name to Wine Library. Only after a year of his involvement in the business, he dramatically increased the gross revenue of the company from $3 million to $60 million.

In 2017, Gary formed a new company The Gallery which houses PureWow, an American digital agency which publishes woman's lifestyle.

Gary Vaynerchuk has published over a dozen of books so far which includes: "Crush It! Why Now is the Time to Cash in on your Pa s sion", "The Thank You Economy", "Jab, Jab, Jab, Right Hook: How to Tell Your Story in a Noisy Social World",  "#AskGaryVee: One Entrepreneur's Take on Leadership, Social Media, and Self-Awareness."

The successful businessman and entrepreneur Gary Vaynerchuk earns an impressive amount of money from his business. As of 2018, Gary has an estimated net worth of $160 million.

The successful entrepreneur Gary made the Wine library to take a leap from $3 million to $60 million annual revenue. Furthermore,  he has also invested in Facebook, Twitter, Venmo, Uber, and Snapchat.

Besides, he has also earned a whopping amount of money from his writing career. He has written a number of New York Times bestselling books from which he makes a handsome amount of money.

Gary signed a 10-book deal with HarperStudio for more than $1,000,000 in 2009. With such fame and fortune, Gary has also appeared in a widely popular talk show like Late Night with Conan O’Brien hosted by Conan O'Brien, and The Ellen Show hosted by Ellen Degeneres.

Gary Vaynerchuk is married to his long-time girlfriend Lizzie Vaynerchuk. Gary and Lizzie dated for several years before marrying on November 13, 2004. The couple has a son named Xander Avi Vaynerchuk and a daughter Misha Eva Vaynerchuk.

As of 2018, the couple is living happily with their children.