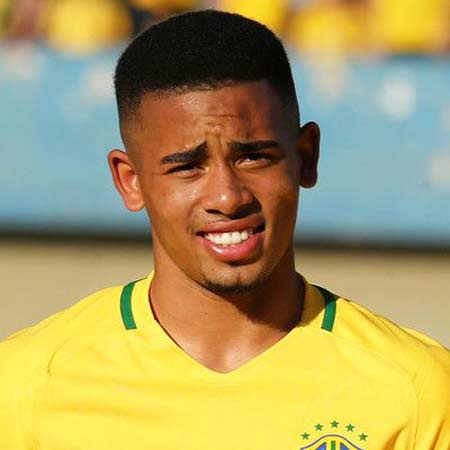 The Messiah to the New generation of Brazillian football team Gabriel Jesus wears jersey no.33 in Manchester City team as a tribute to Jesus Christ who was crucified at the age of 33. He is a pacey striker and can play in any position of front three. Born and raised in the streets of Brazil his playing style and trickery reflects Brazillian flair and Jogo Bonito. When he arrived at Manchester City many doubted he could not fit in the physical approach of English Football. But he was sensational in his first season at City benching Sergio Agüero and scoring a couple of goals only to be stopped by injuries. In his second season, he won Premier league title as Pep Guardiola's rampant city broke almost every record.

While the last edition of Worldcup saw many people criticising lack of star central striker in the team, Gabriel Jesus may be the answer to all the Brazillian prayers in the road to Russia Worldcup 2018.

Gabriel Fernando de Jesus was born on 3rd April 1997  in Sau Paulo, Brazil to father Dinis De Jesus and mother, Vera Lucia Jesus.  He was the youngest son among four children of his family. During his younger days, he played street football and joined various amateur clubs.

At the age of 16, he signed youth contact for Brazillian club Palmeiras. He scored 54 goals in 48 matches in his youth tenure at Palmeiras.  In January 2014 he signed a professional senior team contract with Palmeiras.

Jesus made his first Brazillian league appearance against Athletico Mineiro in a 2-2 draw. He scored his first goal for Palmeiras in the cup tie against Agremiaçăo Sportiva Arapiraquense in a 1-0 win. His first league goal came against Esporte club in a 3-2 win. He remained at Palmeiras until January 2017 and scored 28 goals in 83 appearances.

Due to his amazing 2015/16 season with Palmeiras scoring 21 goals in all competitions he was a transfer target to Manchester city. City paid the transfer fee of $39 Million for him during August 2016, but due to work permit, his transfer was finalized only on January 2017.

He made his premier league debut against Tottenham Hotspur in a 2-2 draw. In his first full game for Man City in the league, he scored one and assisted one as Man city won against West Ham. Jesus had fine form in his first few games for City, but soon he was injured. He finished the season with seven goals and four assists in the league as city finish 3rd in the table. 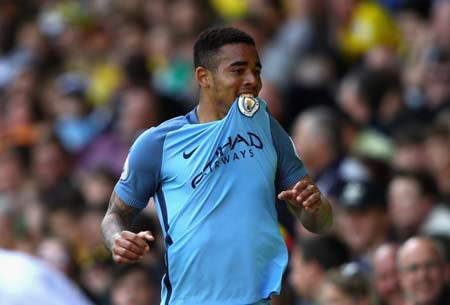 City started 2017/18 season with a bang, and Pep Guardiola's master tactics finally paid off as City won 18 league games in a row. He scored his first goal of 2017/18 season on 26th August in a 2-1 win over Bournemouth.

Jesus featured in various youth levels for Brazil and was part of the squad that finished runner-ups in2015 under 20 world cup. He was also selected in the senior team squad in place of injured Douglas Costa, but due to lack of U.S visa, he missed the final selection.  He was also part of Brazil team that won Summer Olympic games in Rio. 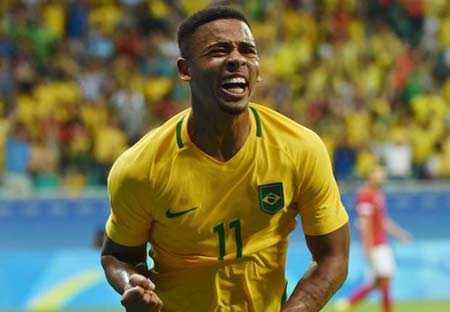 He made his debut for the Brazillian senior team against Ecuador on September 1, 2016, in 2018 Worldcup qualification match. He scored twice in that match as Brazil won easily by 3-0.  He was top scorer in the CONMEBOL section for Worldcup Qualifiers scoring 7 goals in 10 matches. He is included in 23 man squad of Brazil National team for World cup Russia 2018.

Gabriel Jesus receives a weekly salary of $101,684 from Manchester City. His estimated net worth is to be believed around $3 Million. Though only 21 years of age and about to sign a contract extension it is sure his net worth is going to rise up in future. His car collections include Mercedez Benz and Bugatti Veron. His mother, Vera Lucia control most of his salaries.  Adidas endorses Gabriel Jesus.

Gabriel Jesus is Mama's boy, and his mother has a huge influence in his life. She controls his salary and has upper hand on who he dates or not. He was very young when his father left him, and she raised him along with his siblings all alone by herself being a housemaid.

Jesus is still unmarried, and his girlfriend is not revealed yet.  He has three older brothers and one older sister.  He considers Ronaldo Luis Nazario de Lima the original Ronaldo as his idol, and he is the huge fan of Stephen Curry, Basketball player.

Jesus who is a great follower of Christianity chose jersey no.33 as a tribute to Jesus Christ as Jesus was Crucified at the age of 33.