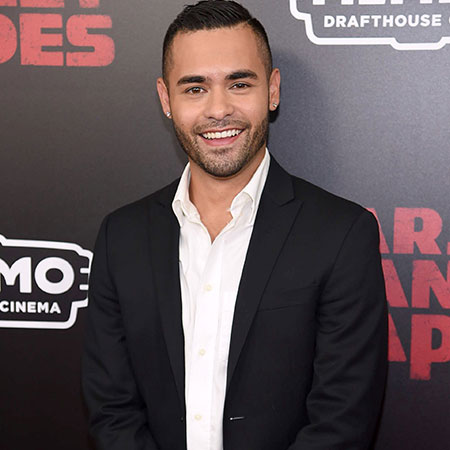 Gabriel Chavarria is one of the famous American actors who grabbed a wide range of fame after playing the role of Jacob Aguilar in Hulu’s East Los High. He is also widely known for appearing in the lead role on USA Network’ The Purge. Keeping the personal life secretive, and focusing on professional acting career has helped Gabriel to collect a huge figure of net worth.

Gabriel Chavarria was born on April 29, 1989, and is 29-years old as of January 2019. He was born and raised in California, the United States of America under the birth sign Taurus. He is of American nationality and belongs to the Honduran ethnicity.

Though Gabriel has not disclosed the detail information regarding his parents and family, he is said to have a large family that includes his parents and siblings. He has ten brothers and a sister whose name is unknown.

Gabriel, time and often shares pictures of his parents and siblings on his social media accounts like Instagram, which shows the special bond they share. Back on 8 May 2016, Gabriel uploaded a photo of his folks expressing love and gratitude towards them.

Gabriel also has a niece whom he shares a picture with on his Instagram.

For your information; Gabriel Chavarria started his professional acting career back in 2007 when he appeared in his debut movie, Freedom Writers which was directed by Richard LaGravenese. The film was originally released on January 5, 2007.

Purge Night with the fam.

Four years later, Gabriel appeared in A Better Life. However, he grabbed huge attention after playing the character of Jacob Aguilar in the Hulu series named East Los High. The movie was premiered in 2013.

Three years later, Gabriel appeared in a significant role in the drama movie, Lowriders. In the following year, he made an appearance in War for the Planet of the Apes. In 2018, he appeared in the lead role of television series The Purge and Hunter Killer.

Gabriel has not disclosed much information regarding his earnings and income, however, we can say that he is earning a decent amount of money appearing in numerous movies and television series.

In the USA, an average salary of an actor ranges from $45,905 to $68,014, and we can a s sume that he earns in a similar range. As of early 2019, Gabriel Chavarria’ net worth is estimated to be in $thousand It seems like he is enjoying a lavish lifestyle but has not disclosed anything about his mansion and cars collection.

Gabriel Chavarria, who openly talks about his professional career and often appears on the headlines for his movies and television series, has always been silent when it comes to his personal life.

Gabriel loves to keep his personal life behind the curtains and has not openly talked about his love life and relationship affairs. This was the reason behind people and paparazzi suspecting on his sexuality.

Many sources claimed that he was gay and single until 30 April 2013 when he uploaded a picture on his Twitter with a girl claiming her as his #wifey.

The posted picture reported that Gabriel is a married man. The name of his wife is Divna Thapa who goes by Twitter name ForeverYoungDv. Recently, Divna has changed her Twitter name to “thatwouldbesodv.”

In the same way, on 22 December 2014, Gabriel mentioned that he would be getting married in Las Vegas. It is still not known whether he is still a married man or is fiancée to someone.

Besides this, Gabriel was once rumored to be dating his co-star Danielle Vegas.

Gabriel stands a height of 5 feet 7 inches and has an average weight of 150 lbs.

You May Be Interested: Andrew Form and Adelaine Kane