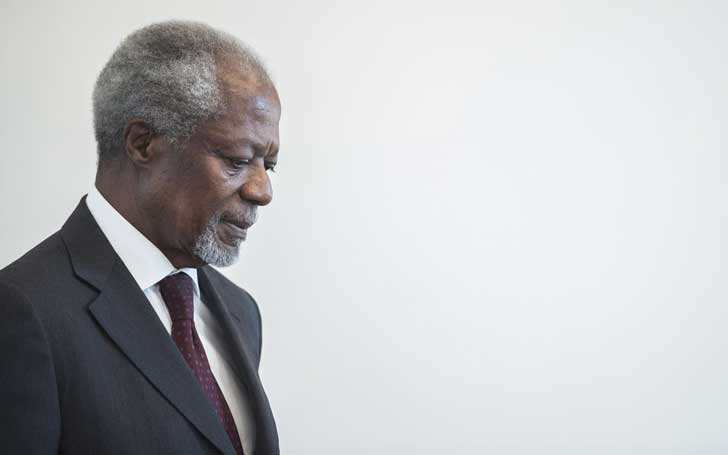 Kofi Annan Foundation confirmed his death with an emotional statement on Twitter on Saturday. The foundation announced with the immense sadness the "Annan passed peacefully on Saturday 18th August after a short illness", the statement read.

It is with immense sadness that the Annan family and the Kofi Annan Foundation announce that Kofi Annan, former Secretary General of the United Nations and Nobel Peace Laureate, passed away peacefully on Saturday 18th August after a short illness... pic.twitter.com/NDOy2NmAAs

The current UN chief, Antonio Guterres remembered Annan as "a guiding force for good" where the Russian President Vladimir Putin called him a "remarkable person." Former US President Barack Obama said the laureate had always pursued a "better world." He said,

Long after he had broken barriers, Kofi never stopped his pursuit of a better world.

Many political and administrative leaders,  including British prime minister Theresa May, took to their social media tributing late Annan. Here are the tweets:

Sad to hear of the death of Kofi Annan. A great leader and reformer of the UN, he made a huge contribution to making the world he has left a better place than the one he was born into. My thoughts and condolences are with his family. pic.twitter.com/P0SWagShJM

Saddened to hear that Kofi Annan has passed away. His warmth should never be mistaken for weakness. Annan showed that one can be a great humanitarian and a strong leader at the same time. The UN and the world have lost one of their giants.

I am grief-stricken over the death of Kofi Annan. Kofi was the epitome of human decency and grace. In a world now filled with leaders who are anything but that, the world’s loss becomes even more painful. He was a friend to thousands and a leader of millions.

Annan, the first and the only black African to lead the UN, served as the Secretary-General at the time when the threats of global terrorism were engulfing the world. He served the organization for a decade since 1997 to 2006. His fight to reduce those threats and secure a more peaceful world led him to win the Nobel Peace Prize.