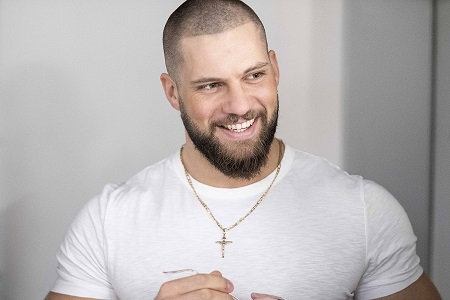 Florian Munteanu is a German actor, professional boxer, and athlete. He famously starred as Viktor Drago in the drama-sport film Creed II. The 30-year-old boxer is also about to star as Razor Fist in the upcoming action-adventure film Shang-Chi and the Legend of the Ten Rings.

How Tall Is Florian Munteanu? Parents And Education

Florian Munteanu  was born on October 13, 1990, in Munich, Germany, to Dorin Munteanu and Florica Munteanu. His father was also a boxer and athlete.

He attended the Ludwig Maximilian University of Munich, where he took training in sports, media, and event management, earning a bachelor of arts in 2014.

He holds dual nationalities of German-Romanian. His nickname is Big Nasty.

Munteanu landed his debut acting role in the short-drama film Bogat in 2016. The film was directed by Valentin Kruse and starred actors like Bogdan Pirnau and Sandra Bosch. CAPTION: Florian Munteanu is a German actor and professional boxer who famously starred as Viktor Drago in the drama-sport film Creed II SOURCE: The Tracking Board

He then rose to fame as Viktor Drago in the drama-sport film Creed II, which starred Michael B. Jordan and Sylvester Stallone.

The 30-year-old boxer is also about to star as Razor Fist in the upcoming action-adventure film Shang-Chi and the Legend of the Ten Rings.

His other upcoming films are Violence of Action and Borderlands.

Florian Munteanu has an estimated net worth of $1 million as of May 2021. The majority of his riches comes from his professional life as an actor and boxer.

The actor has worked in the drama-sport film Creed II, which racked up over $214 over million at the box office against the budget of $50 million.

Moreover, he also adds a decent sum from his Instagram with 503 thousand followers. As per data, he gathered $1,506 to $2,510 per sponsored post.

Creed II star Florian Munteanu is not dating and seems to be single at the moment. The actor hasn't revealed anything related to his relationship till now.

The boxer c u m actor is very close to his co-stars and colleagues. He and his co-star Tessa Thompson was seen together attending the European Premiere Of Creed II. CAPTION: Florian Munteanu and Tessa Thompson attending the European Premiere Of Creed II-The movie was a big success which collected $214 over million at the box office SOURCE: The HotCorn

Apart from that, he is an avid fitness guru. He has a routine of training abs four times a day. Also, he mostly focuses on the obliques in the lower abs to get the eight-pack -a lot of hanging leg raises or knee raises.