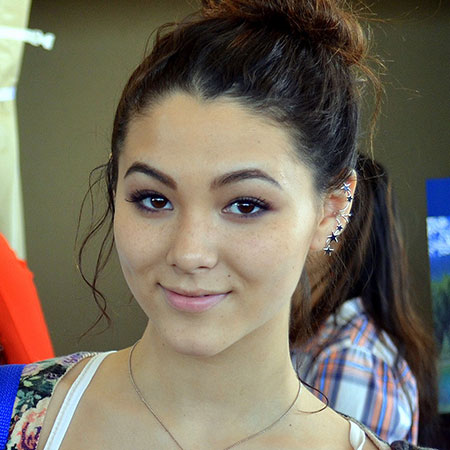 Fivel Stewart is an American actress, known for her appearance in Pit Fighter (2005), Hansel & Gretel: Warriors of Witchcraft (2013), Freeze (2013). The Californian-native Stewart started her acting career since she was 7 when she worked in State's Evidence. She later rose to prominence from her work in several other films and television series.

Fivel Stewart was born on 4th November 1996, in Beverly Hills, California, the USA to parents Renee Stewart and Nils Allen Stewart. Her mother served as a part-time actress whereas her father was a professional stuntman who has contributed his talent to over 100 films.

Stewart holds an American nationality and belongs to the mixed ethnicity. She has Scottish, Russian, and Blackfoot Native American descent from her father side while her mother is of Asian descent.

She has two siblings, Booboo Stewart, and Maegan Stewart, both are professional actors. During her early age, she used to play martial arts in 2002 and 2003. Moreover, Fivel was a World Champion in Martial Arts.

Talking about her career, Fivel Stewart has been working in the entertainment industry since the tender age of 7. She first worked in 2004 thriller drama State's Evidence, however, her role in the movie was uncredited. The same year, she was cast as Chrissy Deavers in romantic comedy Yard Sale.

Further, she performed a recurring role of Betty Betty in American LGBT-oriented supernatural soap opera, Dante's Cove from 2004 to 2006. During the time, she was selected for the role Lucinda for 2005 action film, Pit-Fighter starring Scott Adkins, Stana Katic, Steven Bauer, and others.

After that, Fivel Stewart made her notable roles in the number of TV series and short drama. Some of them are The O.C., Blue Dolphin Kids, Booboo & Fivel Stewart: Rainy Day, Like a Country Song, Lab Rats: Elite Force, and Atypical among others.

As of now, Stewart is busy on her upcoming projects, The Haunting of Sharon Tate, which is set to release on April 5, 2019. She is also busy on other projects like The Windigo, The Never List, The Girls of St. Joan, and Devilwood.

Fivel Stewart is currently 22 years old and is not married till the date. But she is happily in a relationship with actor Andrew Kai. Though the lovebirds have been dating for some years now, they both are lip-tight about their relationship details.

Stewart is active on Instagram and Twitter. As of 2019, she has about 74.4k followers on Instagram. Steward frequently updates her fans and followers about her upcoming projects and professional aspects of her life through her social media, however, she rarely shares her personal life and relationship stuff on her social media.