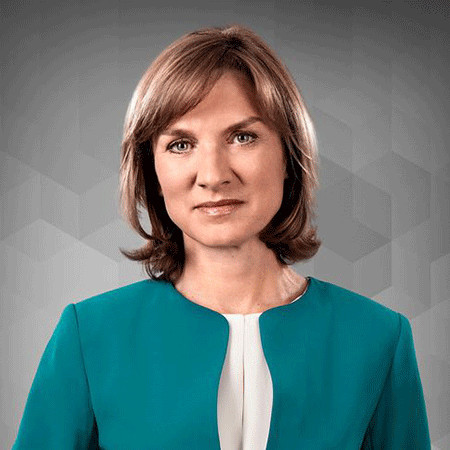 A British television journalist, newsreader and television presenter Fiona Elizabeth Bruce is one of the distinguished personalities in BBC. Her career in BBC has spanned more than 2 decades till date. She has served in different flagship programs of BBC. Born on 25th April 1964, fifty-two years old Fiona is actively serving at BBC with all her dedication.

She attended Haberdashers Aske's Hatcham College in London and studied French and Italian at Hertford College in Oxford. While at college, she was carefree and lived a punk life and also dyed her hair into the blue for a week.

The journalist spent most of her early childhood days in Singapore with her family.

After graduating from the university, Fiona Bruce joined the consulting firm for a year. She did not enjoy her experience and hence started working at advertising agencies including the one where she met her future husband. Afterward, she started to work for Panorama. She became an a s sistant producer on Panorama and later started reporting for Breakfast News from 1992.

She began to appear in BBC South East as an occasional presenter and also worked for Newsroom South East as a reporter. In 1999, Fiona Bruce became the secondary presenter for the BBC Six O'clock News.  She also served as the presenter and reporter in BBC One's award-winning current affairs series, Real Story from 2003 to 2007. She wrote and presented about the Queen's Palaces in 2011 and a doc u mentary on Leonardo da Vinci in 2012. She is the presenter of BBC Four quiz program Hive Minds since 2015.

The newsreader and television presenter has worked along with Huw Edwards, Michael Buerk, and Peter Sisson.

Fiona Bruce is involved in optical charity organization Vision Aid Overseas as its vice president. She also took part in what's it going to take? campaign for the feminist charity WOMENS Aid. She is also a Freeman of the City of London.

Fiona Bruce's Net Worth And Salary

According to the annual report from the BBC, it has been disclosed that Fiona Bruce is paid 500,000 pounds per year as her salary in 2014/2015. This made her one of the highest-paid journalists in the corporation. According to celebrity net worth, the media personality has an estimated net worth of around $3 million, as of 2019.

Fiona Bruce is married to her husband Nigel Sharrocks. They got married on July 1994 in Islington. Her husband is currently serving as the non-executive chairman of Digital Cinema Media. The two met at their workplace where she was an employee and he was her employer, is the director of the advertising company.

The couple has two children named Sam, born on January 1998 and daughter Mia born on November 2001. The family lives in Belsize Park in London and has a second home on Sydenham, Oxfordshire. Fiona Bruce faced adverse publicity for returning to her work just after 16 days of her delivery.