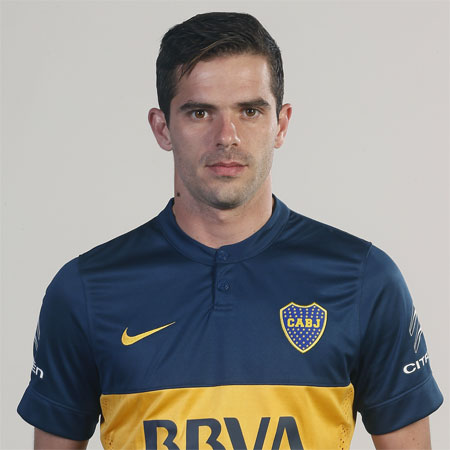 A 28 year old Argentine footballer, Fernando Ruben Gago, was born in the year 1986 April 10 at Ciudadela, Buenos Aires, Argentina. He owns the height of 177cm and has the body weight 65Kg. He was born and brought up in Argentina. He is a married man. Gisela Dulko, a professional tennis player, is the name of his Spouse. They got married in the year 2011. This beautiful couple is the proud parents of a Child, a son, named Mateo born in 2013. Fernando Gago, Sergio and Lionel Messi are the childhood friends and are the teammates in the international arena. Fernando Gago is not just a footballer. He is also a literature and an art enthusiast. He earned the nick name of “El Pintita” meaning “ the little one trying to look good” being scolded at times for playing with his hair.

Fernando Gago plays as the main position of defensive midfielder but can play well a central Mid-fielder. He spent most of his professional career playing at the Spanish Clubs. He has strong right foot. He has excellent dribbling skills. He is skilled in shooting and passing as well. His marking in long and short passes are accurate. He is energetic and with pace. He is good at tackles. He dives into tackles leading to fouls and injuries. He could not go to the height of reputation due to being injured several times and missing the matches. He has good control on the ball and ball interceptions. According to the salary statistics of 2012, his Salary is mentioned to be 3 million Euros. His agent is BBC Management GmbH and has the market value of 3.5 million GBP.

Fernando Gago had the passion for football since his young age. He started his youth career being trained and developed at Boca Juniors joining it in the year 1991. After being promoted to the senior team of the club, he made his professional debut in the year 2004. He spent three seasons playing for Boca appearing in69 matches with a goal score. Afterwards in 2007, he signed with the Spanish Giants Real Madrid. He spent five years in the team appearing in 92 matches with a goal. In the meantime, he was loaned to Roma in the 2011/2012 seasons where he appeared in 32 matches with a goal. In 2012, Fernando Gago played for Valencia for a season 2012/2013 appearing in 12 matches. In 2013, he was loaned to Velez Sarsfield. After coming from loan, he returned to Argentina and started playing from his former club Boca Juniors. Fernando Gago is in the Current Team of Boca Juniors as a Midfielder from squad No.5. He has appeared in 20 matches from the team so far. He is in the first team of Argentina National Football Team since 2007. He has appeared in 46 capped matches. He has the experience of playing in under-20 and under-23 Argentina National Football Team in the year 2005and 2008