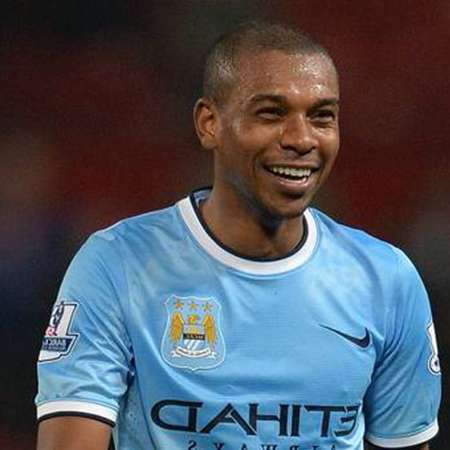 Fernandinho is a Brazilian professional footballer currently plays as a midfielder for Manchester City and the Brazil national team.

He showed a pa s sion for football at a very young age. He is well known for his blistering pace and ability to shoot from long distances. He is described as an "a defensive midfielder with a box to box style of play, contributing in large part to the defense and the attack.

With a powerful shot and great pa s sing range,  Fernandinho has played an important part in breaking up opposition attacks and creating goal scoring opportunities. He is quick, strong and powerful with accurate shooting ability and has the ability to play with both feet.

He has been included in Brazil's final 23-man squad for the 2018 World Cup.

He was born on May 4, 1985, in Londrina, Brazil. He is the son of Luis Carlos Roza and Cristiane Machado de Oliveira.

A top player with a fine range of pa s sing and the ability to score the spectacular, Fernandinho opted for a new challenge when he signed his first professional contract with Atlético Paranaense in 2002.

In that same year, Fernando was named the best young player in his state. In the following season, Fernandinho played for the Brazilian youth team and helped it to win 2003 FIFA World Youth Championship.

In 2004, as part of Paranaense, Fernando scored nine goals and was awarded the silver medal of the Brazilian Championship.

In 2005 he led his team to the Copa Libertadores finals. Immediately after that Fernandinho signed a five-year contract with Shakhtar Donetsk. The Brazilian midfielder debuted for Shakhtar in the summer of 2005 in a match against Krivba s s Krivoy Rog.

As part of the club, Fernandinho was named Player of the Season in 2008. Fernando made a great contribution to Shakhtar’s victory in the UEFA Cup 2009.

After the season 2012/2013, Fernandinho was invited to an ambitious English side Manchester City. Since 2011 Fernando Luiz Roza is called up to represent Brazil.

Fernandinho has represented his nation in many tournaments in his career. He made his debut appearance for the Brazil national team on August 11, 2011, in a 3–2 friendly defeat against Germany.

He scored his first international goal on his return to the Brazil team on 5 March 2014, in a 5–0 win over South Africa. He was apart of a Brazil's squad for the 2014 FIFA World Cup. He made his tournament debut as a half-time substitute for Paulinho in the third game of the group stage, scoring the last goal in the 4–1 victory against Cameroon.

He was then selected in the starting line-up for Brazil's penalty shootout defeat of Chile in the round of 16.[80] Fernandinho played a full match against Colombia in the quarter-finals.
He was named in Tite’s final 23 man squad for the 2018 World Cup in Russia in May 2018.

Awards, Achievements, Salary and Net Worth

Fernandinho is a successful personality having won many prestigious awards and honors. He played a key role in the Manchester City which achieved a winner position in Premier League and Super Cup.

Manchester City has also become the winner of UEFA Europa League in which Fernandinho has a great contribution and effort. Having the achievements, Shakhtar Donetsk Player of the Season and Golden Football of Ukraine Top Player of the Ukrainian Premier League 2008, Fernandinho became a firm fans favorite following a succession of influential performances.

He consolidated his reputation as one of the most promising defenders in world football and has an excellent positioning. Fernandinho is the “brain” of Manchester City. The speed and accuracy of his pa s sing and his vision of the game make him the reference point in the Manchester City.

Fernandinho is a Christian and says Jesus as his biggest inspiration. He speaks Portuguese, Russian, Italian, Spanish and English. He is a married man and has two children.

He married Glaucia Roza in a private wedding ceremony. The couple is blessed with one son, Davi, born on 5 March 2010, and a daughter, Mariana, born on 28 January 2017.