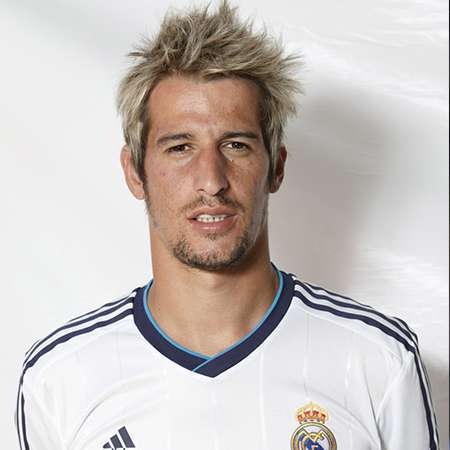 Fabio Alexandre da Silva Coentrao with the full name is a Portuguese professional footballer .He was born on March 11 in 1988 and is 26 years old.He was born in the place named Vila do Conde in Portugal. His spouse Andreia Santos with whom he got married in 2010.Fabio plays for his Current Team Real Madrid. He plays a role of Defender. Fabio had played for Real Madrid in Spain and the Portuguese national team as well. He performs primarily as a left back and even he can also function as a left winger, and sometimes as a defensive midfielder. His mother had worked in a fish factory.

His professional career started in 2004. He did his first contract with Rio Ave F.C. Before joining the club’s main squad Fábio practiced in the football academy of Rio Ave. During the three years, from 2004 till 2007, Coentrao was not able to hold the team’s basic players and made only occasional appearances for the matches in the initial line of the Portuguese club. During the next three seasons he played 28 matches of the club and scored 4 goals. In 2007, S.L. Benfica made a professional contract with the young Portuguese. Fabio occasionally appeared on the pitch in his debut 2007 and 2008 season but his displays were not of the level that could let him to make the team’s prime player. The club wanted to loan Fabio so that he would remain in the practice and prepare to perform in an organized manner. For another six months, from January to June 2008, Coentrao appeared in 16 matches for Madeira C.D. Nacional and was able to score 4 goals. After completing from Nacional Centro he had to again come back for the loan made with Real Zaragoza. Fabio only played once for the club for the season of 2008 and 2009. Fabio went for   his own Rio Ave F.C. which made his initial foundation for his professional career. In 2009 and 2010 Fabio had peformed in 16 matches for the club and scored 3 goals. Again Fabio continued to play for the Portuguese S.L. Benfica where the defender snatched the opportunity to be on the starting line-up. The head coach encircled his trust on him and thereby gave a left wingback position. Coentrao did not make his coach down and had an awesome season in 2010 and 2011. After his appealing and successful performance Coentrao made his transfer for Real Madrid C.F.The Portuguese coach Jose Mourinho admired Fabio’s game style and wanted him on his team. Fabio was paid 30 million Euros in July 2011, and he got signed for long-term contract with Real Madrid C.F. Coentrao is a leading Defender of his Current Team, Real Madrid. Fabio played for the Portugal youth national team appearing in 16 matches and scoring 5 goals during the season of 2006 till 2010.From 2009 Fabio has made his occasional entrance where he has been invited to the Portugal national team.

He has a Salary of 2 million EUR (2012).His Height is 1.79m and has a weight of 72 kg.This Portuguese footballer is often seen in News feed and Images.