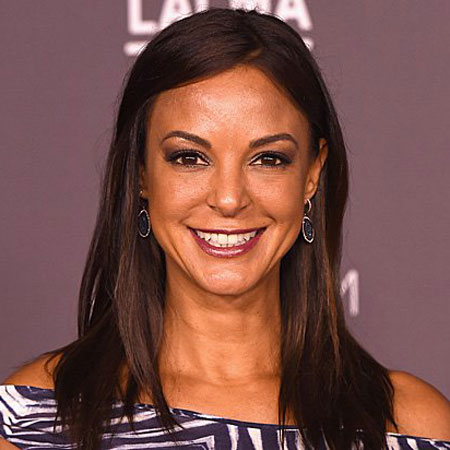 Emmy-Award nominated Eva LaRue is an American model and actress best known for portraying the role Dr. Mario Santos in ABC soap opera, All My Children. She also played Teri Tanner on the Netflix series Fuller House and Natalia Boa Vista on CSI: Miami. LaRue started her showbiz career at the age of six, after appearing in several commercials and as of 2018, she has performed in more than fifty movies and television series.

Eva LaRue was born Eva Maria LaRue on December 27, 1966, in Long Beach, California to Marcie LaRuy and Luis LaRuy. She was raised along with her three siblings, two sisters, Nika LaRue, and Lara LaRue and a brother, Luis Jr. She is the third cousin of American actress and political activist Jane Fonda. She is an American and belongs to the mixed ethnicity of Puerto Rican, French Dutch, and Scottish.

In 1984, LaRue won Danfranc Productions Miss California Empire. She graduated from the Norco High School in 1985. Soon after her graduation, she started her modeling career. She first worked with the Judith Fontaine Agency and eventually with Frederick's of Hollywood.

Eva LaRue made her acting debut in 1987 with The Barbarians but she had an uncredited role.  Then she appeared in several TV series Charles in Charge, Perfect Strangers, Freddy's Nightmares, Married...with Children Dragnet in a minor role.

LaRue rose to fame after starring in the ABC's soap opera, All My Children. She portrayed the role Dr. Maria Santos Grey and featured in the show from 1993 to 1997 and again from 2002 to 2005.

In 2004, she earned Daytime Emmy Award nomination in the category of "Outstanding Supporting Actress in a Drama Series" for All My Children.  In 2010, LaRue again reprised her role, Maria on the 40th anniversary of All My Children.

In 2016, LaRue appeared in the revival series of the sitcom Full House entitled Fuller House where she played the role of Teri Tanner alongside Candace Cameron Bure, Jodie Sweetin, and Andrea Barber.

Eva LaRue has an estimated net worth of $3 million. Her main source of income is her acting career. She has been part of several commercially successful movies including the 2008 American crime thriller film, Lakeview Terrace which received mixed reviews from critics and audiences. The movie collected $44.7 million at the box office. She shared the screen with Samuel L. Jackson, Patrick Wilson, and Kerry Washington.

Eva LaRue has been married thrice. In 1992, she tied the knot with an actor, John O'Hurley but the couple failed to handle their relationship and split after two years in 1994.

She then married her fellow co-star of All My Children, John Callahan in 1996. The couple has a daughter, Kaya McKenna Callahan (born on June 26, 2010).  They divorced in 2005 citing irreconcilable differences.

On June 26, 2010, LaRue married for the third time. She exchanged the vow with her longtime boyfriend, Joe Cappuccio who is a businessman in a private ceremony. The couple separated after four years in 2014.

LaRue's sister, Nika LaRue was photographed by convicted serial killer Bill Bradford. Her poster was on no.3 which was released by the Los Angeles Sheriff's Department to find living victims. Soon after the revelation, it was featured in  CSI: Miami in the season five episode "Darkroom".

While Eva was in the initial phase of her career, she became the victim of sexual assault by the casting couch. She said that producer Steven Seagal sexually harassed her on the pretext of a screen test.

Below, we present the video of Eva LaRue