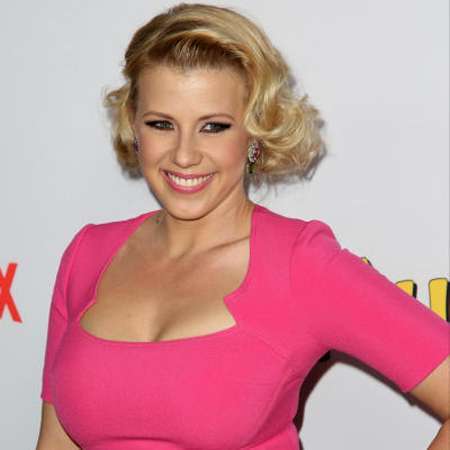 Jodie Lee-Ann Sweetin, an American actress/singer, is known for her role as Stephanie Tanner on the sitcom Full House and its sequel series Fuller House.

In 2016, she participated in the reality dancing show Dancing with the Stars, finished in the sixth place. In 2017, she appeared in the TV movie Finding Santa and TV series Hollywood Darlings.

Jodie Lee Ann Sweetin was born on January 19, 1982, is popular as Jodie Sweetin. Jodie was born in Los Angeles, California, US.

Jodie is a top-ranked television personality and actress who started her career 1987 in the American television industry. She is an American citizen belonging to White-American ethnicity.

Sweetin is mostly recognized by her character in Full House where she was portrayed as Stephanie Tanner. She also became a part of Fuller House which is also a spin-off series.

Jodie's mother and father were in prison during her birth and she was adopted by her uncle Sam Sweetin and was undertaken by his second wife whose name is Janice during that moment she was just 9 months old. All those adoption processes were legally accepted while she was 2 years old at her age.

Jodie was a brilliant student in her high school time. During her educational phase, she met Matthew Morrison. Once they performed together in a musical theater program.

Jodie made her debut in acting in the year 1987, where she appeared with Valerie. She was portrayed with the character as Pamela. Along with this, she also hosted the second season of the popular fuse television show named as Pants-Off Dance-Off which is also the remarkable performance of her.

Jodie Sweetin is currently single. She has been married and divorced thrice till now. In 2002, she married to Los Angeles Police officer Shaun Holguin. The couple spent four years together and divorced in 2006.

Then, she met Cody Herpin, a film coordinator and started dating him in May 2007. After few months of dating, the couple was married on July 14, 2007.

Afterwards, she started dating Morty Coyle and welcomed a daughter together in 2010. After a year, they got engaged in January 2011. They were married on March 15, 2012, in Beverly Hills. Unfortunately, she filed for divorce in June 2013 and started living separately.

Their divorce was finalized in September 2016. After her third failed marriages, she began dating Justin Hodak. In January 2016, she announced her engagement to Hodak. Unfortunately, she called off her engagement to him on March 24, 2017. After separating him, she has not dated anyone (publicly).

Similarly, for the second time, she again had her affair with Cody Herpin in the year 2007. They officially got married but did not last for a long duration and they got separated. After this, she was having her fantastic time with her spouse who name is Morty Coyle whom she married in the year 2012.

Even this relationship could not last longer than a year. Jodie is the mother of her 2 children and is taking good care of them and balancing her career side by side. Her second husband was transportation coordinator. There are no rumors of any present boyfriend now.

Jodie Sweetin’s current net worth is $4 million. She has ama s sed a huge amount of net worth from her three-decades-long career.

She receives a $5K weekly salary from the TV series Fuller House. In 2011, she claimed $25K lawsuit against Clark Taylor Stavros since he damaged her property and loss of earning capacity. She has a new black Audi A6 cost $80,360.

Jodie’s nickname is Jones and her height is 5 feet 6 inches. Similarly, her salary and net worth are also amazing sums of amount compared to the last year.