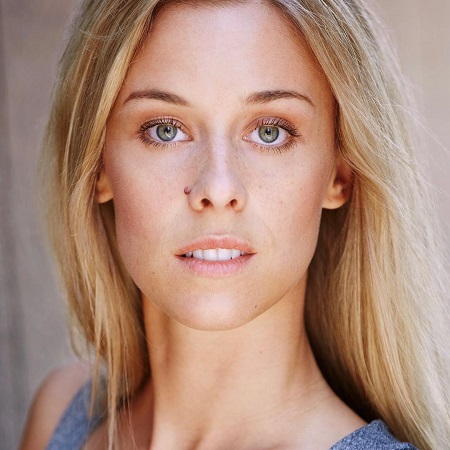 Ester Udden is a rising Swedish actress and a s sistant director based in Stockholm and Los Angeles. The rising actress, who has an extensive career in television series and movies, has worked in a comedy television show and featured in post-production.

Ester was born in 1989 and is currently 30-31 years old. She was born in Stockholm, Sweden. The television actor’s nationality is Swedish; however, her ethnicity is not known.

Regarding her educational background, she took dancing courses from 2004 to 2008. In 2008, she joined Kulturama Theatre School and was in the theatre school till 2010. She then joined Malmo Theatre Academy/ Teaterhogskolan I Malmo in 2010. She graduated in 2013.

Besides this, Ester has not disclosed anything about her parents, siblings, and family life.

Ester is 5 feet 9 inches tall and has a slim body build. Her distinctive characters are blue eyes and blonde hair.

The actress began her acting career via theatre in 2012. She has made theatre appearances in Satans Strindberg, Children's Hour, Master and Margeruite, Carolus Rex, We Are Wild Now, Johanna, Tribes, and Bruset.

In 2012, Ester made her television debut portraying a supporting role in Maria Wern. Two years later, she appeared in Partaj. Her other television appearance involves in Finaste Familjen, Svartsjon 2, and Falkenberg Forever.

Regarding the movie career, she has worked in two movies. She first appeared in lyckligare Kan Ingen Vara and Invalid.

Invalid’ actress has kept everything away from the media. She has neither disclosed about her dating life nor opened up about her relationships.

Likewise, Ester has not appeared in any interviews to open up about her personal life. As there is no any information of her link-ups in the media, she is reported to be single.

However, a couple of gossip mongers mentioned that Ester might be married or dating someone, but is keeping everything away from the media.

How Much Is Ester Udden’s Net Worth?

It has only been around eight years since Ester began her professional acting career. She has only worked in a handful of projects.

Though Ester has not disclosed the exact figure of net worth, many tabloids reported that she has a net worth in a hundred thousand dollars.