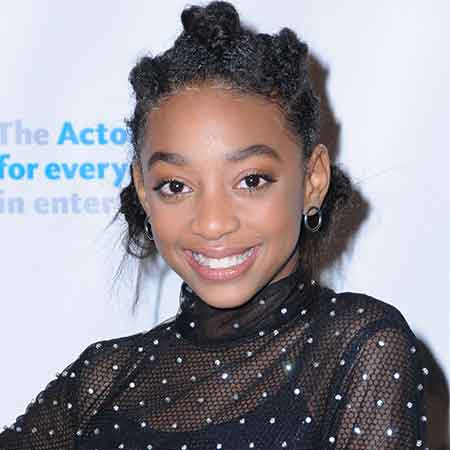 Famously known as the older daughter of Randall and Beth, Tess Pearson on NBC's drama TV series, This Is Us, Eris Baker is one of the promising Hollywood actresses. Baker appeared on the show at the age of eleven and has won a Screen Actors Guild Awards for her amazing performances.

Eris Baker was born on 4th August 2005 in the United States under the birth sign Leo. Her father and mother started dating when they were in the high school and eventually tied the knot. Her parents raised her in the United States along with her three young siblings, sisters. As a child, she was a fashion enthusiast.

Families belong together. I wish I could join in on the marches today . My heart and my family stands with all those separated and all those fighting.

Being an elder child of the family, she wants to motivate her younger siblings. Baker attended the traditional school. When she is not on sets, she is at the public school.

Eris Baker's Career And Net Worth

From the very early age, Eris Baker wanted to become an actress. Baker made her dream come true at the early age of 11 when she earned the role of the older daughter of Randall and Beth, Tess Pearson on NBC's drama TV series, This Is Us. The series starred Milo Ventimiglia, Mandy Moore, and Chrissy Metz.

As per Baker, initially, she did not think that she would earn the role. She also told that she ''cried to death'' after the audition. She explained,

''I went in there, I was starting really well, but I messed up. They were asking me to do it again and again and again. When I was done with the audition, I really cried to death. My mom had to hold me like I was 2 years old.''

''But it taught me a really valuable lesson because I know now that they were telling me to do it again and again not because I was doing it bad. But to see how many ways I could do it and to see if I could take directions.''

Moreover, she calls her audition ''hilarious.'' The series helped her to rise to stardom and also helped to win Screen Actors Guild Awards at the age of 12.

Secrets Out I’m so excited to share @people special edition “Complete Guide to This Is Us” is on newsstands NOW!! Go grab your copy and get a preview to Season 3!!

From 2017 to 2018, Baker appeared on Disney Channel's comedy TV series, K.C. Undercover with Zendaya, Veronica Dunne, and Kamil McFadden. As of 2018, she also worked in Netflix's original sitcom, Alexa & Katie starring Paris Berelc and Isabel May.

Eris Baker's net worth is not revealed yet but she surely earns an impressive amount from her career.  The teen actress has played many major roles in TV series. And her salary is over $65,000.

Eris Baker, the young actress, has won the heart of millions of fans at the short period of time. Furthermore, she also has a great fan following on her social media. As of Dec 2018, she has over 42.2k followers on Instagram.

He thought we were to die for Happy Resurrection Sunday !! The Bakers #HeisRisen

Besides, Baker is very close to her family who supports her in every step of her life. She explained,

''My parents always supported me through my journey, so when I told them I wanted to be an actor they were like, ‘Yeah, you’re ready.''

Baker is a fashion enthusiast.

Baker is quite busy in building up her career. At such a short span of time, she has grabbed huge attention and won millions of hearts for her amazing acting skills.

Check out the facts about Eris Baker:

Actress American Net Worth siblings Family This Is Us