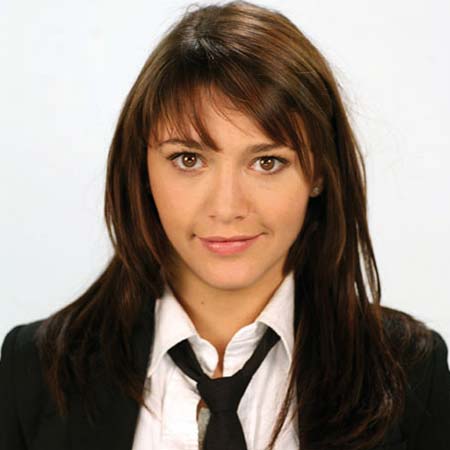 Emma de Caunes is a French actress who is famous for her role Sabine in 2007 family comedy film, Mr. Bean's Holiday. Similarly, her other notable roles include Un frère... as Sophie / Sister (1997), The Science of Sleep as Zoé (2006), and The Diving Bell and the Butterfly as L'Impératrice Eugénie (2007).

Emma de Caunes was born on 9th September 1976 in Paris, France, under the birth sign Virgo. She is the daughter of famous actor and director Antoine de Caunes and director and graphic designer Gaëlle Royer.

She has two siblings, Jules de Caunes, and a half-brother, Louis de Caunes from his father’s relationship with Journalist, Agnès Léglise.  Further, her grandparents are journalist Georges de Caunes and Jacqueline Joubert, one of the first continuity announcers on French television.

Talking about her career, Caunes made her acting debut from the 1988 short film, Margot et le voleur d'enfants as Margot. After few years of gap, she made her feature film debut in 1996 in L'echappee belle.

The following years, she was selected for the lead role, Sophie in French Comedy, Drama, Un frère... and won several awards including, César Award for Most Promising Actress, and Paris Film Festival for Best Actress. Moreover, he was also nominated for  Molière Award for Best Female Newcomer for her worked in theater, La Nuit du thermomètre.

Then, Caunes got her second lead role, Sabine in 2007 family comedy film, Mr. Bean's Holiday, starring Rowan Atkinson, Willem Dafoe, Sharlit Deyzac, and many others. Before this, she was cast in several shorts videos and films such as Au bord de l'autoroute, 3 petits points la lune, The Science of Sleep, and The Diving Bell and the Butterfly among others.

As of now, Emma de Caunes has been playing, Nathalie Denard in internationally co-produced drama television series, Ransom. Jessica Parker Kennedy, Nicolas Van Burek, Severn Thompson, and others are the cast member of the show.

Emma de Caunes is married to the famous English comic creator, Jamie Hewlett. The couple tied the knot on 10th September 2011 and completed their seven years of a marital relationship.

Previously, she was married to French musician and singer-songwriter, Mathieu Blanc-Francard, known for stage name Sinclair. The former pair exchanged their vows on 15th September 2001 and also shares a daughter, Nina Blanc-Francard born in October 2002.

They, however, couldn't handle their relationship and divorced in 2005.