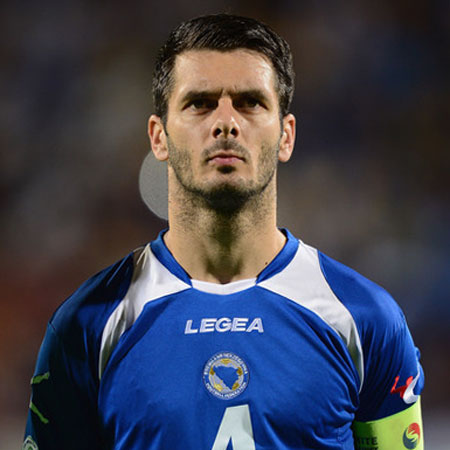 A Bosnian footballer, Emir Spahic, was born in the year 1980 August 18 at Dubrovnik, Croatia. He owns the Height of 186 cm and weight of 77 Kg. He is 33 years of age. Fatima is the name of his mother. His parents were from various parts of Yugoslavia but worked at Coratia and formed a family. He has two siblings named Nermin and Alen. His younger brother Alen is also a football player. He is the first cousin of Croatian National Team Player Edin Dzeko. Emir Spahic was born and brought up in Croatia. He studied at the University of Sarajevo majoring in Sport and Physical Education. Besides playing football, he is fond of tennis. There is no other information available on the personal life of Emir which includes his relationship status.

Emir Spahic is a talented defender. He has got the opportunity to learn and experience from different clubs remaining with different team and different coach. He is a young, energetic and full of enthusiast and ambition. He is very good at tackling and ball interception. His standing and slide tackles are nice but often commits the fouls. He needs to work on his aggression and discipline in the game. He is good at passes and agile to ball movement. There is no authentic information available on his Salary but his recent value is 2.5 million Euros. Spielerrat GmbH is the name of his agent.

His Current Team is Bayer Leverkusen which he joined in the year 2013 on two year contract. He plays as a Centre Back/ Defender from the team from squad No. 5. Emir Spahic began his full international career joining in the first team of Bosnia and Herzegovina National Team in the year 2003. Since then he plays from the team as a Defender. He has appeared in 72 cap matches from this team with three goal scores. He is the Captain of this National Team. He has also the experience in playing in under-21 National Team of Bosnia Herzegovina in the year 2000-2002.

Emir Spahic started his youth career joining at FK Krajina Cazin and later moved to Celik Zenika. After being promoted in the first team of the Celik, he made his professional debut in the year 1998. Spending a season of 19998/1999 at Celik, he appeared in 19 matches with a goal. In 1999, he joined at GOSK Dubronik. He appeared in two seasons from the club appearing in 22 matches. He then began to play at NK Zagreb in 2001. He appeared in 38 matches from Zagreb bagging 2 goals for the team and moved to Shinnik Yaoslvl in 2004. He spent a season in Yaroslavl appearing in 26 matches with six goal scores. He seemed very unstable at the clubs. He has played for Torpedo Moscow in 2005/2006 season, Lokomotif Moscow from 2006-2009. He joined with Montpellier in the year 2009. In 2011, he was transferred to Sevilla from where in 2013 he was loaned to Anzhi Makhachkala.