Elpidia Carrillo is a Mexican actress and director most known to the American audience as Anna in the 1987 sci-fi action movie Predator and as Sandra in the 2005 drama movie Nine Lives.

Her Father and Older Brother were Murdered

Elpidia Carrillo was born on August 16, 1961, in Paracuaro, Michoacan, Mexico, one of eight children, in a family of farm laborers. Born in an impoverished family in a crime-infested area of Mexico, her childhood difficult -- even more so when her father was murdered when she was three. Her older brother took over the duties until he was shot down when she was six.

When Carrillo turned 10, her older sister took her to the town of Uruapan, where she began working at a Chinese restaurant.

While working at the restaurant, Carrillo was scouted by a local talent photographer who granted her a modeling contract. She landed her first acting gig at age 12 in the 1977 Mexican surrealist drama film, Pafnucio Santo. She sufficiently impressed the director to land a more prominent role in his next movie, Deseos.

At 16, she landed her first starring role in the controversial 1978 historical drama movie, Nuevo Mundo, which was banned in Mexico for over two decades.

She made her American feature film debut alongside Jack Nicholson and Harvey Keitel in the neo-noir drama, The Border. She followed that up with roles in 1983's Beyond the Limit and 1983's Oscar-nominated Under Fire.

She made her US television debut as Coana in the Emmy-nominated CBS historical drama miniseries Christopher Colombus.

She went on to star as María in the 1986 war drama, Salvador, which earned her an Independent Spirit Award nomination for Best Female Lead, whilst also earning her co-lead James Woods an Oscar nomination. 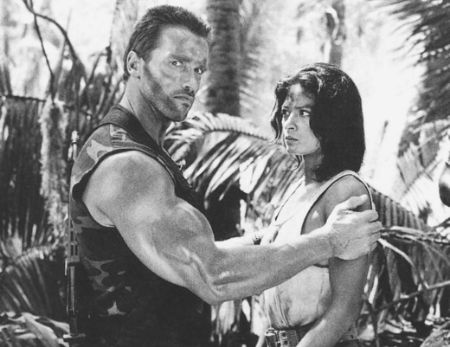 She became a household name when she co-starred alongside Arnold Schwarzenegger in the 1987 sci-fi action blockbuster Predator.

Capitalizing on her sky-high stock, Carrillo made guest appearances in many television shows, including Miami Vice, 21 Jump Street, The Pretender, Resurrection Blvd., The Mentalist, and Nashville.

She also had acclaimed roles in feature films, including Johnny Depp's only directorial effort; 1997's controversial independent drama, The Brave, starring himself and Carrillo along with Marlon Brando.

In recent years, Carrillo has appeared in TV series like the acclaimed HBO drama series, Euphoria, starring Zendaya; and the FX spin-off/prequel of the acclaimed series Sons of Anarchy, Mayans M.C.

Carrillo is the mother of two children. The father of the children has not been disclosed.

What is the Net Worth of Elpidia Carrillo?

According to celebritynetworth.com, Elpidia Carrillo has a net worth of $5 million. Her wealth comes from her career as an actress and director. The Mexican-born actress is perhaps most known to the wider audience for playing Anna in the 1987 sci-fi action blockbuster Predator and Sandra in the 2005 drama Nine Lives. She has also carved a legacy on television with roles in such shows as Miami Vice, 21 Jump Street, Nashville, Euphoria, and Mayans M.C.