Edward Snowden's Girlfriend Lindsay, Are They Living Together In Russia? Details Here! 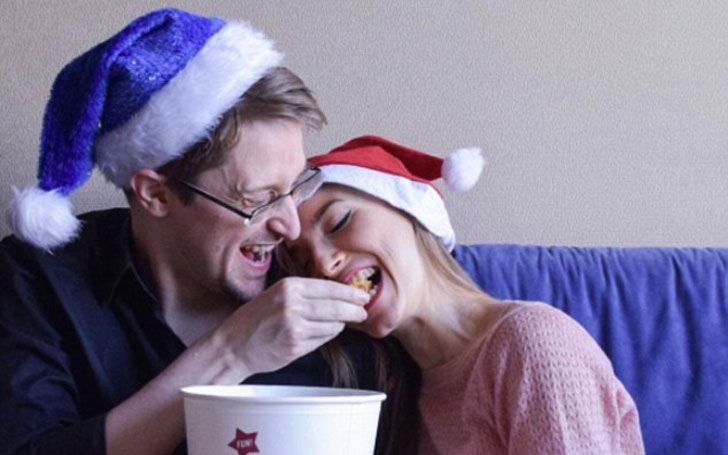 Lindsay Mills, a former ballet dancer, rose to fame all of a sudden in the year 2013 after her boyfriend Edward Snowden leaked some classified documents from National Security Agency without authorization. He was a former CIA employee. The leaked discourses revealed NSA's numerous global surveillance programs.

Snowden who currently lives in an undisclosed location in Moscow has been in a relationship with Lindsay Mills for nine years now. Their love life and Snowden's whistleblowing actions became so popular that Hollywood made a movie named 'Snowden' in the story. Joseph Gordon-Levitt and Shailene Woodley played the leads.

Lindsay and her longtime boyfriend Edward started their relationship back in the year 2008. Edward gained worldwide recognition in 2013 when he worked with journalists exposing some confidential information from the National Security Agency (NSA) without authority. It was only after 2013 that people became interested in their relationship.

Lindsay and Snowden used to reside in Hawaii when he was an employee at Central Intelligence Agency (CIA).

Lindsay and her boyfriend Snowden

After the significant event in 2013, Snowden was taken in an asylum in Russia, after being sent back from Hongkong. When fleeing to Russia, Snowden told Lindsay that he was going on a vacation. She did learn the truth later on and remained in the U.S. for a while before flying to Russia to meet Snowden.

According to the 2014 documentary Citizenfour, Lindsay Mills moved to Russia to live with Snowden in July 2014.

And for the present scenario, Lindsay frequently posts photos with Snowden on her socials.

She captioned the following picture:

misfits. #selfportrait under hand crafted mementos. and bed head. a shared smile. between misfits. who found complement in each other. strength in numbers. laugh, play, and harmonize with all they have. whose love is reaffirmed in the hardest moments. and breathes in the down times. that devotion. brings back. to keep sorting strange shaped pieces. and form their peculiar puzzle of life. #happyvday

Lindsay Mills and Edward Snowden even spend holidays together, here's a Christmas post that Lindsay captioned:

c. #selfportrait Holidays are about traditions, laughter, and memories. This year we adopted the Japanese tradition of KFC Christmas chicken. And it brought out our silly side. The little connections that bring us all together are what make this time of year so magical. Whether you are celebrating old traditions or making new memories, we hope you all have a wonderful end to a wild year!

Lindsay can be seen with Snowden in most of her pictures on her socials, however, according to The New York Post, she doesn't live in Russia with Snowden due to visa restrictions. That means she travels back and forth, Lindsay seems very committed to Snowden!

For those that have forgotten, I moved to Hawaii to continue my relationship with E. It has been quite an up-and-down emotional rollercoaster since the moment I stepped off the plane. I looked over at E and smiled.This was the most adult, boring moment I've had ever. I felt grown-up, suburban, and oddly content.

Mills, however, remained silent and never spoke on the very subject of her boyfriend or his actions after the whistleblowing event in 2013. Mills was last spotted attending the 2015 Oscars and also appeared onstage for the promotion of the documentary 'Citizenfour'.

Snowden moved to Hawaii with his soulmate before he came forward to the press and leaked unauthorized confidential information related to government bodies. Though they lived together for many years, Mills was oblivious of Snowden's whistleblowing plans.

Lindsay on stage at the 2015 Oscar Awards

In the Oscar-winning documentary, Citizenfour, he explained that he remained silent about his plans to protect her and their family.

His revelation included information about some global surveillance programs conducted by NSA and the Five Eyes Intelligence Alliance working together with European Governments and several other telecommunication companies.