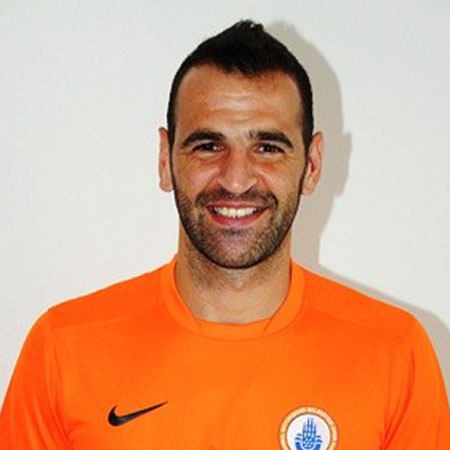 Portuguese footballer Eduardo dos Reis Carvalho plays both for the Portuguese National team and his current team S.C Braga as a goalkeeper. He wears the No.1 jersey and has established himself as being one of the best goalkeepers in his nation. Having played for Portuguese as well as Italian clubs and also for the national team, Eduardo has established himself as a sought after goalkeeper owing to the number of goals he has saved in his entire career as a goalkeeper.

Born on 19th September 1982 in Mirandela, Portugal, he started his career as a youth player for his home city’s team, Mirandela on 1992. Eduardo then moved on to Vitoria Guamares on 1996 and then back to Mirandela in 1997. He was then chosen into the Sporting Club de Braga’s youth system and debuted as a loan to the S.C Beira Mar in the Portugal’s top division league in the 2006-07 season for six months. He was loaned again in the upcoming campaign to Vitoria de Setubal which won the Portuguese League Cup and qualified for the UEFA Cup. He was honored with a Man of the Match award in the final match against Sporting Club de Portugal after having saved three kicks in the penalty shootout.

For the 2008-09 season, Eduardo returned to Braga and played in all the league matches while playing also for the Minho team’s UEFA Cup round of 16 run. He did the same for the following season and the club finished in the second position and he conceded 20 goals.

7th July 2010 over saw Eduardo signing a four year contract with Serie A’s Genoa C.F.C for a salary of 4 million Euros. It was also agreed that Braga would receive a 25% future transfer fee if the Italian team would sell the player.

Eduardo played in all but one games for Genoa in his first and only season as a final midtable position. He returned to Portugal in July 2011 and joined the S.L Benfica on loan. He signed for the ?stanbul Büyük?ehir Belediyespor on a three year contract and has recently been loaned to Braga.

Eduardo’s international career for the Portuguese team started with his appearances in the UEFA Euro 2008. Following this, he was called in by the new national team coach Carlos Queiroz for the 2010 FIFA World Cup qualifiers. His full debut was on 11 February 2009 against Finland in a friendly match. He also appeared in more matches and denied many shots from the opposition. He was then relegated to the bench in his club and finished the UEFA Euro 2012 qualifiers with five games.

This goalkeeper is known best for his excellent ball tackling skills and images of him having saved a goal in one or the other matches constantly surface across the internet. His height is 6 ft 2 inches and his weight is 77 kg. Not much is known about his personal life, dating history and social interactions.