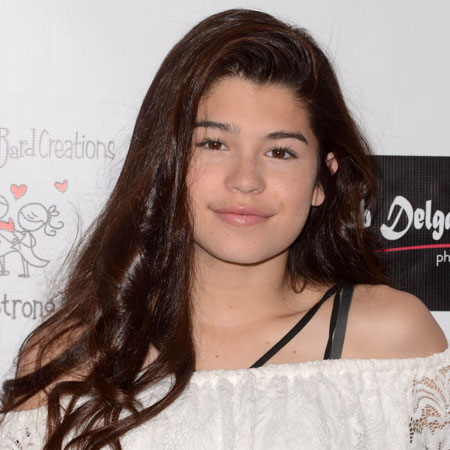 American actress and singer, Dylan Conrique is known for her role as Kayla on the famous web series Chicken Girls, starring Riley Lewis, and Caden Conrique among others.

Conrique also made her appearances in some TV movies including Frolic ‘N Mae, House of Darkness, Weird Wild Wonderful Days of School, and a few others. She is also a YouTuber.

Dylan Conrique was born on 13th April 2004 to Kathy Donahue-Conrique and David Conrique, in Gilroy, California, U.S. He is 18 years old as of year 2022.

She has a brother, Caden Conrique who is also an actor as well a YouTuber. She is American and belongs to the Hispanic ethnicity/race.  Currently, she is in high school.

Dylan Conrique started her acting career with the 2008 Television series, The World’s Astonishing News! playing the role of a student. At that time, she was only 3 years old.

In 2016, Conrique was cast in Isaiah Jonathon White’s TV movie, Weird Wild Wonderful Days of School as Dakota along with Helena Assis, Shay Backe, and Grace Kelley among others.

In 2017, Dylan Conrique made her appearances in the American comedy television series, Henry Danger as Piper’s friend. Later, she landed a notable role of Kayla in Chicken Girls alongside Annie LeBlanc, Riley Lewis, Hayden, and Summerall.

In 2018, Conrique appeared as the lead in the 2017’s comedy & animation short film Frolic ‘N Mae, starring Carissa Bazler, and McKayla Dunne, and others.

Dylan Conrique is also known as a singer and released her first official music video Heartbeat on February 14, 2017. She wrote the song along with Paulina Cerrilla, and Andrew Lane.

She has covered songs like How Far I'll Go by Alessia Cara, Mercy by Shawn Mendes, Touch by Little Mix, and Sorry Not Sorry by Demi Lovato. She also featured ATVs in her video for ‘Most girls.’

Dylan Conrique is currently 14 years old and is still studying. According to a few reputable online sources, her estimated net worth is $1 million. She earns around $ 10K-15K per episode for her role in Chicken Girls.

Conrique has also gained immense popularity from her YouTube channel, and as of 2018, she has 77,720 subscribers. She on average earns $6.7K - $106.7K annually from her channel.

Dylan Conrique is a teenager and is spending joyful time with her parents and siblings. Dylan is not dating anyone at current.

Conrique has lots of friends and often posts photos with them on Instagram.  On Jan 9, 2018, Dylan Conrique uploads a video, titled, Dylan Conrique's 2018 Reel.