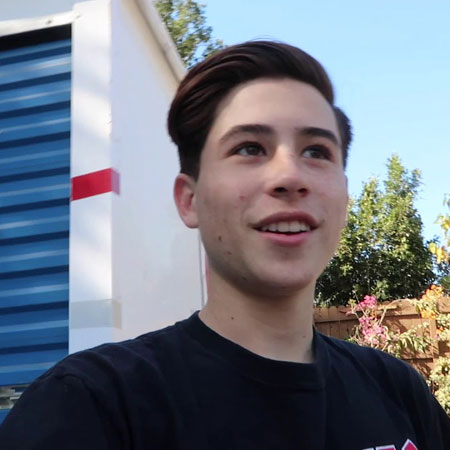 American YouTuber and actor, Caden Conrique is recognized for his role in the series Chicken Girls. Before landing the role, he played minor roles in House of Darkness, and Weird Wild Wonderful Days of School. He is also a popular Musical.ly star and till date has accumulated massive followers.

Conrique appeared in a music video for Johnny Orlando's Everything and also appeared in few others music videos for Danielle Cohn and Mackenzie Ziegler.

Caden Conrique was born on 11th June 2001 in Gilroy, California, United States of America, under the birth sign Gemini. He belongs to Hispanic ethnicity/race and holds American nationality.

He is the first child of Kathy Donahue-Conrique and David Conrique and has a younger sister, Dylan Conrique. Conrique developed an interest in acting from an early age. At present, he is pursuing his high school studies.

Caden Conrique started acting from the 2016 TV movie, Weird Wild Wonderful Days of School as a student along with cast members Helena Assis, Haile Brown, and Shay Backe among others.

In 2017, Caden Conrique appeared in 7 episodes of Chicken Girls as Tim Sharp, alongside Riley Lewis, Hayden Summerall, and Brooke Elizabeth Butler. He also made his appearances in Afterschooled with Summer McKeen.

Conrique has featured in Johnny Orlando’s music video, Everything. He also appeared in few others music videos of Danielle Cohn and Mackenzie Ziegler.

Caden Conrique is also a YouTuber who joined on Sep 12, 2016, creating a self-titled channel. As of 2018, he has more than 55,330 subscribers in his channel. Some of his most viewed videos are Annie LeBlanc 13 birthday party, I got her a ring, Almost kicked out of sams club, and Happy birthday Mads.

According to a few reputable online sources, Caden Conrique has an estimated net worth of around US $250 Thousand as of 2018, but it has not the official figure.

The Chicken Girls star Caden Conrique is in a relationship with Madison Lewis. They confirmed their relationship in 2018.

The pair often shares pictures of each other on their Instagram accounts, and also made a video named “I got her a ring!!!!!” on his YouTube channel.

Conrique’s hobbies are acting, making comedic videos, and hanging out with friends. He loves to eat pizza, burger, and french fries. Conrique is also a pet lover. He likes red, green, blue colors.

In 2018, Feb 16, Caden Conrique uploaded a video, which he titled the weirdest vlog ever.