The recently-wed duchess still had the label hanging from her Self Portrait dress as she walked along the red carpet in Tonga on the tenth day of her Royal Tour with her husband Prince Harry. 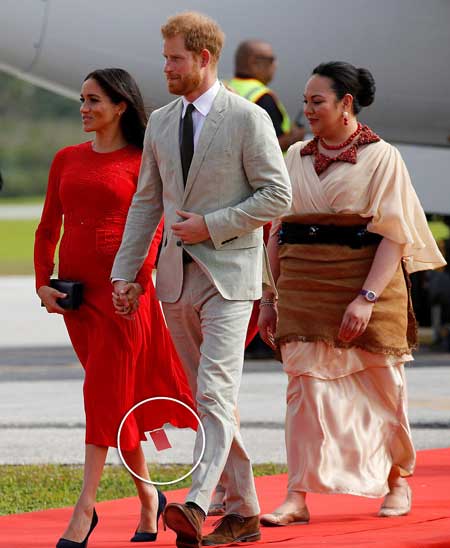 Despite leaving the tag on her $628 red floral dress, the mother-to-be looked radiant while she walked along the red carpet holding hands with her husband after their 90-minute-long flight from Fiji.

The Duke and Duchess were welcomed to Tonga by Her Royal Highness The Princess Angelika Latufuipeka, daughter of King Tupou VI and Queen Nanasipau'u Tuku'ah.

The couple then walked the red carpet where they were accompanied by the traditional entertainment from Pelehake villagers. Then the duchess received flowers from the Honorable Melenaite Tuipelehake, a great-niece of the Tongan King.

Later on the day, the Royal couple became the guests of honor at another welcome reception and dinner in Nuku'alofa with the King and the Queen.

Prince Harry and Meghan Markle arrived Tonga after they unveiled a statue to a hero sergeant in Fiji. 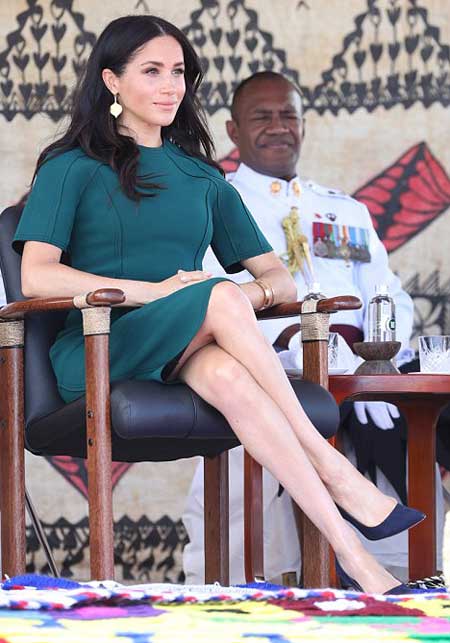 Before, Meghan was spotted cradling her growing baby bump in a forest green Jason Wu dress while her husband gave a speech in Fiji. In his speech, Prince Harry greeted the audience with the traditional 'Bula!' He said,

Thank you to the people of Fiji for the warm welcome we have received during our visit. The Duchess and I are leaving with special memories of your beautiful country and look forward to returning in the future.

Afterward, the President of Fiji, Major General Jioji Konrote thanked the couple for their visit and also congratulated them on the upcoming birth of their first child next year. He said,

Thank you for coming to Fiji and gracing us with your much welcome but very short visit. It's good to know that you promise to come back. May Almighty God be with you now and in the future.

The Royal couple is on a 16-day-long tour of Australia. They have visited some places in Australia, Fiji, and Tonga and they are remained to travel to Sydney, Australia; and Wellington, Auckland, and Rotorua in Newzealand.