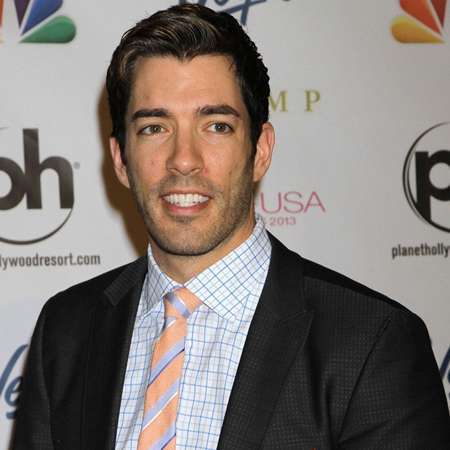 Drew Scott, a Canadian actor, and real estate investor are known for appearing in the reality TV show Property Brothers along with his twin brother Jonathan Scott. Drew recently participated in the reality show Dancing with the Stars along with dancing partner Emma Slater.

Drew Scott was born on 28th April 1978 in Vancouver, Canada to Joanne Scott who worked as a paralegal in downtown Vancouver and Jim Scott who worked in the film industry as an actor and a s sistant director. He is of British and Canadian nationality and his ethnicity is White.

He has two siblings Jonathan Silver Scott who is known as one of the world's youngest international illusionists and JD Scott who is a writer. Jonathan is Drew’s Identical Twin.

Drew was always interested in sports; he grew up on a horse ranch and has been riding horses since the age of three.

Drew is a second-degree black belt in karate and was a Canadian National Karate champion for numerous years. Drew used to play college basketball due to his huge height but was more interested in acting.

Drew attended college for four years and went on to major in kinesiology with a minor in mathematics. Drew then went on to study at the Actor's Foundry in Vancouver, British Columbia. He is also noted to be an original member of the comedy troupe the Raving Thespians.

Drew began acting in theater, improv, and sketch comedy at an early age. Drew went on to be seen in television series like Smallville, Breaker High, and Madison.

As an actor, Drew has been seen in For Your Security, Girlfriend Experiences, Possession, A Better Me, Dancing Ninja, Karma Inc., Amazon Falls, Coyote Mountains, The Oracle, Under the Apple Box, The Interrogation as Detective Ryan Burrows.

He is also noted to be the host of Buying and Selling. Drew has acted as character Jackson in Great American Dream and as Jason Keppler in The Christmas Parade. Drew, is currently co-hosting HGTV show Property Brothers with Jonathan.

The show focuses on helping people buy wonderful homes just under their budget. The show has now become a big hit. As a director and producer, Drew has produced film and TV galas and events like the Leo Film & TV Awards Drew currently owns a real estate investment company named Scott Real Estate.

Drew Scott's net worth is estimated to be around $10 million. He and his brother Jonathan Scott have a combined net worth of $20 million.

The brothers have become known for their ability to take homes that seem impossible to fix, and making them like new again. Scott Real Estate, Inc. currently has offices in Vancouver, Calgary, and Las Vegas, and the brothers are the stars of the reality series, "Property Brothers" on HGTV.

They purchased their first house when they were 18 years old, and after renovations, they sold it a year later for a profit of $50,000 while attending university.

The brothers have authored the books Dream Home: The Property Brothers' Ultimate Guide to Finding & Fixing Your Perfect House in 2016 and It Takes Two: Our Story in 2017.

Scott currently lives in the Windsor mansion with his fiancee. They paid $ 2.3 million earlier in 2017 to buy this house. He has another house in Las Vegas- he bought with his brother worth $400500 in 2011. Drew has been voted one of Entertainment Tonight's 2011 Hottest Canadian TV Bachelors.

Drew is currently a married man. Drew Scott is engaged to his longtime girlfriend Linda Phan. Phan works as a creative director of Scott Brother Entertainment. They started dating back in 2010 and engaged in December 2016.

According to a source, the couple is planning their wedding which will happen in 2018. Drew has never spoken about his past dating details. He is focused on getting his work done and is shy like his identical twin.

The couple tied the knots on May 12, 2018, in a destination wedding in Italy. The couple has been together for a long time unless they married last year. They do not have any children. Scott currently resides in Los Angeles =, California along with his spouse Phan.