Donald Trump Warns North Korea in his Speech ahead of G20 Summit,in Poland 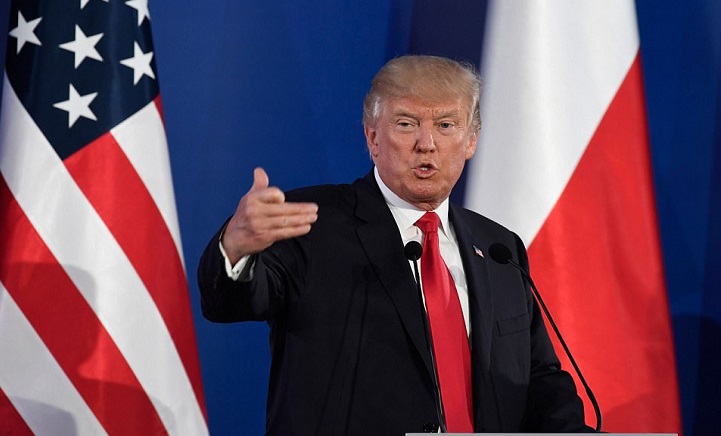 President Donald Trump warned that the West must decide if it has the “will to survive” from the threats sent by North Korea and Russia at a keynote speech in Warsaw, Poland on Thursday.

He also vowed on the summit to confront North Korea “very strongly” and that they could face “some pretty severe” consequences for testing launching missiles and also took a shot at Russia for “destabilizing” actions in Ukraine and other countries.

Trump did not specify the actual U.S.-directed punishment for North Korea, for launching the missile on Tuesday that experts say, had a range of reaching to Alaska.

New sanctions from the USA would have pint-sized effect unless backed by China, which is the North’s financial lifeline. Russia also has rejected further economic burdens on the regime of Kim Jong Un.

At an emergency meeting on Wednesday of the U.N. Security Council, U.S. Ambassador Nikki Haley accused China and Russia of “holding the hands” with Kim, the North Korean leader. At a daily briefing in Beijing on Thursday, a spokesman for China’s Foreign Ministry backed Trump up, calling for calm in response to U.S. remarks.

President Trump at the G20 Summit

After his first meeting with Xi in April, President Trump came out confident that China was on his side and would pressure Pyeongyang to stop testing nuclear weapons and ballistic missiles further. But he has also recently tweeted about the plan saying that it hasn’t worked out yet.

Later, in a speech to a crowd of thousands in Krasinski Square, Trump also concisely criticized Russia — without mentioning President Vladimir Putin, whom he is scheduled to meet on Friday.

Trump also said "the world will be a safer place" thanks to cooperation between Washington and Warsaw.

And also added "We urge Russia to cease its destabilizing activity in Ukraine and elsewhere," calling on Moscow to "join the community of responsible nations."

He also demanded Russia to halt its support given to hostile regimes such as Syria and Iran.

Donald Trump professed the West’s survival “the fundamental question of our time,” lashing out at “the steady creep of government bureaucracy” that he said, “drains the vitality and wealth of the people.”

Ahead of his speech on Thursday, First Lady Melania Trump welcomed the crowd and introduced her husband

The president also urged European nations to pledge more of their money to NATO, as he said the organization's 'Article 5' commitment to mutual defense is an ironclad guarantee.

'Words are easy but actions are what matters,' he said. 'Europe must do more. Europe must demonstrate that it believes in its future by investing its money to secure that future.'

The US president’s address was regularly interrupted by chants of “Donald Trump!” and “USA”, when he praised the contribution to Poland’s freedom of Lech Walesa, the former president.

You may also read: Here are President Donald Trump's Fourth of July Tweets

At the end of the day, the G20 Summit ended successfully in Poland with good remarks as well.