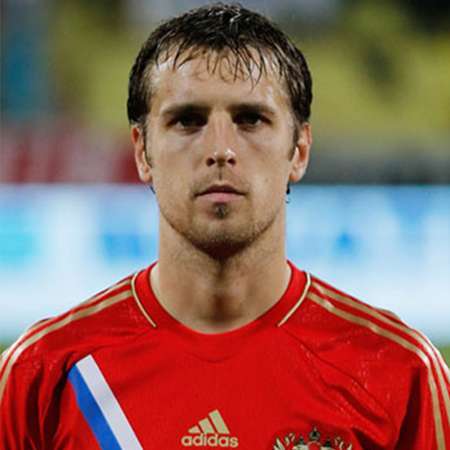 Dmitri Vladimirovich Kombarov is a Russian Footballer who plays in the Current Team of Russia National Team as a Defender and Midfielder as well and in the Team of Russian Club FC Spartak Moscow as a Midfielder from squad No.23. He is 27 years old and has the height of 181 cm and has the body weight of 69 Kg. Vladimir Kombarov is the name of his Parents. He has a Siblings named Kirill Kombarov, who is also a Russian Footballer. Both these brothers play in the same team. Dmitri Kombarov is a married man. Tatiana Kombarova is the name of his Spouse. They got married in the year 2011. He is the proud father of a Children/child, a daughter, named Ulyana Kombarova.

Dmitry Kombarov started playing football at the very age of 4 years old. Dmitry and his brother Kirill joined the Spartak Moscow football academy in the year 1993 to initiate their youth career. They spent 8 years at this club growing and developing in their football skills. In 2001, Dmitri Kombarov and his brother Kirill left the Spartak and joined the Dynamo Moscow due to the conflict with the school coaches at Spartak. In 2006, Dmitri Kombarov was promoted to the senior squad and thusmade his professional debut along with his brother. He spent 4 years at Dynamo Moscow after making his professional debut appearing in 132 matches with 12 goals score. In 2010, Dmitri Kombarov and his brother left Dynamo to join at the Spartak Moscow where they had initiated their youth career. Both the brothers are in this team since 2010. Dmitri Kombarov has the contract with this club until 2017. There is no exact record on Dmitri Kombarov. It is said that his Salary is one of the lowest ones in his Current Club and in the National Team.His Current market Value is of worth 9.7 million Euros. His agent is Football Agency P.A.F.A.

Dmitri Kombarov is in the first team of Russia National Football Team since 2012. He has appeared in 22 cap matches from the team. He made his first appearance from the team in the friendly match against Denmark. He has been included in Russia’s squad for the upcoming 2014 FIFA World Cup in Brazil. It will be his first experience to represent Russia in World Cup.

Dmitri Kombarov plays from the main position of Left midfield but can play well as a left back. He has strong left foot. He is young, energetic and ambitious player. He has enough of the strength and stamina keeping him in pace and durable in the pitch. Dmitri Kombarov is very strong at key passes that help his team mates to convert the pass into goal shots. He is skilled at dribbling the ball. He has good concentration in the ball. He likes to play in short passes, dribble and cross. He likes to tackle which leads him to have fouls often. He does not like to play in long shots or aerial duels. In an interview, he had told, he has improved in his confidence level. He has started to play the ball past people more and take control of the game. He said, a player has to be perfect in everything, whether its pass or position, covering behind yourself. There’s no limit of perfection. He is a very handsome player. Images of this Russian player can be found in google images.