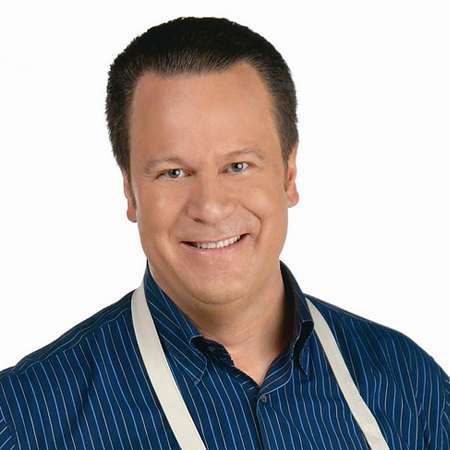 David Venable, an American personality, and author, known for hosting his own show The Kitchen with David on QVC. He has been working with QVC since 1993 and his personality, presenting skills, cooking tips and knowledge of the coolest kitchen gadgets has made him popular amongst fans.  Venable is also an author and has released two cookbooks. Both the books were a huge success selling over half-million copies.

David Venable was born on November 12, 1964, in Charlotte, North Carolina, the US under the birth sign, Scorpio. He was raised by a single mother, Sarah. She has made several appearances on her son's TV show, and the mother-son duo never fails to impress audiences with their cooking skills.

Sarah is the big inspiration in David's life who taught him how to be savvy in the kitchen. While talking about his mother he said:

"I was raised by a single mom, and I’m the youngest of three kids. We were always encouraged to work hard toward our goals. Whenever I had a pie in the sky idea, my mother never thought anything was out of reach."

He was raised in North Carolina, and his roots reflect in his work, mainly through the dishes he makes such as grits, shrimp, and southern homemade biscuits.

Venable studied at the University of North Carolina where he studied journalism.

David Venable started a broadcasting career after graduation and was hired by several TV stations in the United States. He first joined WTAJ-TV situated in Pennsylvania followed by WOAY-TV located in West Virginia.  After this, he managed to run his very own show called the Action Newsmakers.

This show which was about public affairs made him popular. Venable then worked as a host in the Children’s Miracle Network telethon.

His professional career changed for real when QVC hired him in 1993. Furthermore, he first got the job of promoting the gourmet food products of the company through the station. Over the course of time, his position within the channel gradually increased, and then he started to host TV shows.

For Venable, it was the best decision of his life.

"When I was at UNC, I had no idea TV shopping existed. I just wanted to be in TV news. But if I wasn’t open to going where live TV might take me, I might never have found QVC."

For him, his coworkers are his family, and he credits his success to them.

"Getting into e-commerce and TV, it’s all about communication and being who you are. Letting someone get to know you opens the door to people feeling comfortable about what you have to say."

He rose to international fame after appearing as a host of the show named In Kitchen With David. The show airs two times a week where we can see David revealing his best recipes and introducing cool kitchen gadgets. As per the report published by The New York Times, he sold more than $250 million worth of frozen crab cakes, backyard smokers, and egg poachers in 2014.

Besides being one of the loved television hosts, he is also an author. His two cookbooks are In the Kitchen with David: QVC's Resident Foodie Presents Comfort Foods That Take You Home published in 2012 and Back Around the Table: An "In the Kitchen with David" Cookbook from QVC's Resident Foodie published in 2014. Both of his books were highly appreciated by foodies all around the world.

His third book was published in late 2018.

David Venable's net worth is estimated to be around $1 million. His television show is his main source of income from which he earns an impressive salary. Besides, he is also a successful author and his books sold 500k copies worldwide.

Personal Life: Is He Dating Or Married?

David credits his love of cooking to his mother. His mother taught him to be perfect in the kitchen, which was a necessity at the time since she worked a full-time job and was a single parent raising three children.

Besides kitchen works, his mother also taught him to dream big from which he was encouraged to work hard toward his goals.

As far as the personal life of David Venable is concerned, He seems to be very secretive about it. While he has an amiable personality that appeals to his fans on screen, he chooses to disclose very little about his personal life.

His affair and girlfriend history have been secretly hidden from his fans, and as he has not been married yet and does not have a wife, he is even rumored to be gay. Venable, however, has never talked about his sexuality in public.

He is a huge fan of the author and host of the show Food Network program Barefoot Contessa, Ina Garten. The two appeared on his show, and David considered it as one of his biggest achievements.

"When I was meeting her for the first time, she put me at ease. She was so excited to be on my show. She made me feel like my little show was a big deal."

He is also known for his "Happy Dance." To celebrate a delicious meal, David has created a new dancing style named Happy Dance. People just love his dancing moves, and it is quite popular among his fans.

1. Does David on QVC have a partner?

David is a very private person and rarely reveals his relationship status. Due to lack of evidence, we can only a s sume that he is single at the moment.

2. How much does David on QVC make?

3. How tall is David Venable?