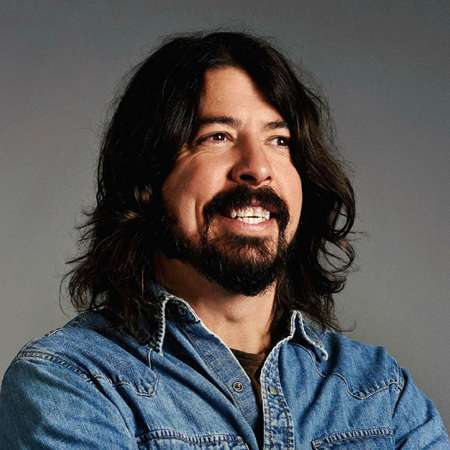 Dave Grohl, an American singer-songwriter, musician, and film director, is best known for his musical career. He was the longest-serving drummer of the grunge band Nirvana. Grohl is the founder and lead vocalist of the rock band Foo Fighters.

Dave Grohl has recorded and toured frequently with the rock band Queens of the Stone Age over the past decades. He has also appeared in various TV series and documentaries.

Dave Grohl was born on January 14, 1969, in Warren, Ohio, United States. His nationality is American and his ethnicity is of Caucasian ethnicity. He is the Virginia Jean( mother) and James Harper Grohl( father) who migrated from Warren to Virginia with his family. His mother and father got divorced when he was 7 years old and eventually grew up with his mother with his sister(Lisa).

When he was 12 years old, he started taking guitar classes but got frustrated and started learning himself which no doubt states that he got some talent inside of him.

Dave Grohl had an emerging interest in music despite he joined Thomas Jefferson High School as a freshman in Virginia. He was voted the vice president of his class.

But, he got badly influenced by drug addiction then his mother decided to transfer him to Bishop Ireton High School in Alexandria.

He studied there for 2 years and got transferred again to another school, Annandale High School, Virginia. During his time in high school, he played with many local bands and learned to play drums without any professional guidance. He decided to drop out of school at the age of 17 years and joined the hardcore band, Scream.

Dave Grohl a professional career in music started at the age of 17 years old. Grohl featured on three of the albums and toured with the band(Scream) several times.

After his few years as a member of Scream, the band canceled their mid-tour with the departure of Ben Pape who was the ba s sist of the band.

In 1990, Dave Grohl eventually got the chance of auditioning with Nirvana and undoubtedly got selected. They worked together for many years and earned a huge name in the music world.

He released a cassette Pocketwatch in 1992 and which was a big hit. Kurt Cobain (the vocalist of Nirvana) said that he was excited at Grohl contributing to the songwriting for their band. In 1994, Cobain committed suicide and Grohl was unsure of what to do without him in the band.

After the frontman Kurt Cobain's death, Nirvana's project ended and Nirvana dissolved. After that, Grohl decided to form a new band with band members of other bands including William Goldsmith and Nate Mendel, and named it Foo Fighters in 1995. They have released several albums including There is Nothing, In Your Honor, and The Colour and the Shape.

Since then, he has been leading the band. They have released eight studio albums as of 2017. The band's current members are; Dave Grohl (vocal), Nate Mendel (ba s s), Pat Smear (rhythm and lead guitar), Taylor Hawkins(drums), Chris Shiflett(lead guitar), and Rami Jaffee(Keyboard).

Dave Grohl is a guy with a good personality and looks. Besides music, Dave is a father and a husband. He was married to her girlfriend, a photographer, Jennifer Youngblood in 1994.

They did a few of the works for his bands together, which include the shooting and the photographs for Nirvana Unplugged in New York and image artwork for the Foo Fighter debut album which they self-titled.

The relationship didn't work well and things didn't get along with his wife which eventually resulted in a divorce in 1997. After six years in August 2003, he married a girl named Jordyn Blum whom he met at the Sunset Marquis hotel bar located in Los Angeles.

Dave Grohl is not only an amazing person but also an amazing guy. He loves helping organizations willing to help needy people as well as the music industry. There are many charities where he has contributed a huge amount of money such as 21st Century Leaders, Autism Speaks, Entertainment Industry Foundation LIFE beat, and others.

Dave Grohl's current net worth is $320 million. He has ama s sed a huge amount of net worth from his four three-decade-long musical careers. In 2015, his net worth was $260 million. He is one of the most successful musicians in the rock genre and his estimated annual earning is $20 million, according to a source.

Since then, he has brought over $1 million annually to his home. In 2015, he earned $10 million from album sales, tours, and live concerts.
Grohl currently resides in a $2 million lavish mansion in Los Angeles. California. In 2016, he sold his Beachfront bungalow for $2.9 million which he bought back for $3.8 million in 2006. He also owns a $140K Tesla car. He frequently travels along with his band member on their private jet A319-ACJ.

Dave Grohl is a fit guy 6 feet tall and weighing 79kgs which suits his height perfectly. His eye color is brown and his hair is black. Being a talented musician it's no doubt that Dave earns a huge amount of money.