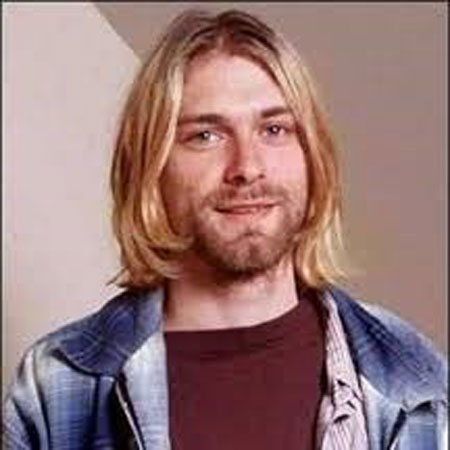 Kurt Cobain was a talented grunge performer, who became a rock legend in the 1990's with his band named 'Nirvana.' He is widely recognized for his grunge rock songs like 'Smells Like Teen Spirit,' 'Rape Me,' 'Man Who Sold The World.'

Kurt Cobain was born on 20 February 1967 in Aberdeen, Washington, U.S.A.  He was raised in a small logging town and started showing his interest in music and art. During that time, Kurt was excellent at drawing. Cobain also learned to play piano by ear and enjoyed a kiddie drum kit gifted by his parents.

He was white in ethnicity and holds American nationality.

His parents got divorced when he was nine and was withdrawn. After the separation, he stayed with his father. On Weekends, Kurt used to visit his mother and sister. After his father remarried, Cobain resented his stepmother, Jenney, and her two children.

Later in 1982, Kurt left his father's place and bounced around from relative to relative for several months. Finally, he went to his mother who was staying with her boyfriend Pat O' Connor at that time.

Kurt Cobain's life changed when he started listening punk rock. After discovering a local punk band, the Melvins, he befriended Buzz Osbourne, a member of the group. Osbourne also introduced him to some other bands, such as Sex Pistol.

Once, Kurt was arrested for spraying painting buildings in town with some of his friends. His friends ran away, but Kurt was caught and taken to the police station.

After few months, he started his first band, Fecal Matter, and recorded few songs together at aunt Mari's house, but never played any gigs.

The following year Kurt Kobain was in trouble with the law again after being caught wandering around an abandoned building, drunk at night. He had to stay few days in jail.

In the year 1988, Cobain was able to make some of his rock ambitious come true. Ultimately, he settled down on the same Nirvana for the group. The band made their first single named 'Love Buzz'.

Nirvana's popularity was growing very fast, as they released their debut album, Bleach in the year 1989. However, the album failed to make much of fame, the recording showed signs of Kurt's emerging talent as a songwriter.

During the time, his band was struggling to make it, he made a fateful connection in his personal life. In the year 1990, Cobain met his match in an edgy rocker named, Courtney Love. The two met at a show at the Portland, Oregon nightclub Satyricon.

One of their most hit single 'Smells Like Teen Spirit', like many Nirvana tracks modulated between the soft and the thrashing. Kurt was equally convincing as he sang the song's mellow chorus and as he screamed its final lines.

Sooner or later, Kurt Cobain was called, one of the best singer and songwriter of his time. Along with the rapid rise of the group, put pressure on the talented and sensitive 24-year old.

Cobain was worried about how his music was being received and how to regain control of a seemingly uncontrollable future. Cobain started using he r o i n IN the early 1990s. AS he claimed, the drug provided and escape, also some relief for his chronic stomach issues.

Before his another album 'Nevermind was released, Kurt met up with Courtney Love, now the lead singer and guitarist with Hole, at an L7 concert in Los Angeles.

They got married in Feb 1992 and welcomed their daughter Frances Bean Cobain in August of that same year.

Both Cobain and Love were into drugs and often used together. They found themselves being investigated by social services after. Love Told Vanity Fair that she had taken he r o i n when she was pregnant.

Always volatile, Kurt's relationship affair was getting more strained. Later, The Seattle Police came to their house after the two had been in a physical altercation over Cobain having guns in the house in 1993. He was arrested for a s sault.

On 5 April 1994, in the guest house behind the Seattle home, a 27-year old punk and grunge rock legend, Kurt Cobain committed suicide. He placed a shotgun into his mouth and fired, killed him instantly.

He also left a long suicide note in which he addressed his many fans, also his wife and young daughter. Despite the official ruling regarding his death as a suicide, some a s sumed whether it was a planned murder and whether his wife, Love had been involved in his death.

Even after death, Cobain continued to intrigue and inspire fans. His group later released Unplugged in New York shortly after Kurt's death as it went on top of the charts.

After Cobain was gone forever, there had been a great struggle about what to do with the member left behind. Grohl, Novoselic fought with Love for many years over Nirvana's music.

Kurt Cobain has earned an enormous amount of money in his short time of career. He has given numerous grunge rock songs, which was peaked at number one for many times.

All over, Nirvana has sold 25 million albums in America and 50 million internationally. Cobain had a total net worth of $100 million before death.