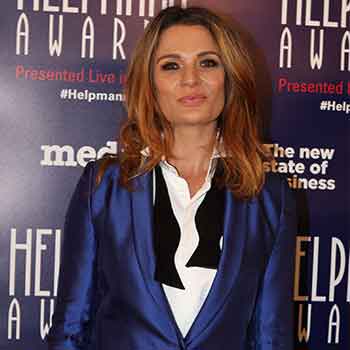 New Zealand actress Danielle Cormack has had a very decorative career spanning over three decades. Debuting from the lead role in the TV series Gloss, Cormack went on working on numerous series, movies, and plays. The talented actress is best known for her performance in the series Wentworth, Xena: Warrior Princess, The Cult, and others. Aside from her successful acting journey, Cormack had a roller coaster ride in her love life as she had two failed marriage. The good thing, she is now in a happy romantic relationship with her partner Adam Antony.

Danielle Cormack was born on 26 December 1970 in Auckland, New Zealand. According to her date of birth, her zodiac sign is Capricorn. She has a mixed ethnicity of French, Irish and German. She grew up with her brother whose identity is not known to the public.

Danielle Cormack debuted in the acting industry from the TV series Gloss in 1987. In the series, she was cast in the main role of Tania Veitch. After her remarkable debut, the actress was cast in the New Zealand television series Shortland Street. She starred in a leading role of Alison Raynor from 1992 to 1993.

Following her breakthrough roles in the television screen, the talented actress starred on the 1993 short film Snap and A Game with No he Rules. Cormack appeared on the big screen in the movie The Last Tattoo in 1994. In the film, she played the role of Molly.

Besides her theatre appearance, the New Zealand actress starred in several popular TV shows To name a few, High Tide (1994), TV film The Call Up (1995) and Overnight (1995). Similarly, Cormack starred on the recurring role of Ephiny in the American fantasy television series Xena: Warrior Princess from 1995 to 2001. The Series starred popular stars like Lucy Lawless, Renee O'Connor, Ted Raimi, Kevin Smith, Adrienne Wilkinson, and others.

In 1997, Danielle appeared on the New Zealand film Topless Women Talk About Their Lives for which she received the New Zealand Film and TV Awards for Best Actress (1997). Following her marvelous performance, the actress worked in an Australian movie Siam Sunset in 1999. Likewise, the actress was cast on the American comedy film Without a Paddle in 2004.

In course of her decades-long career, Cormack starred on New Zealand movies like River Queen (2005), Perfect Creature (2006), Separation City (2009), and many others. Also, the amazing actress notably worked on the television shows like Maddigan's Quest (2006), Rude Awakenings (2007), The Strip (2008), The Cult (2009), and others. For The Cult, Cormack was awarded the Qantas Television Awards for Best Performance by Actress in General Television (2010).

In 2009, the polished artist gave her voice in an animated television series Buzzy Bee and Friends. In the series, she gave her voice for the character Elle-Gator.

Then the actress played the main role of Scarlet Meagher in the American television show Rake from 2010 to 2016. Similarly, Cormack starred on the Australian television drama Wentworth from 2013 to 2016. In Wentworth, she portrayed the main role of Bea Smith. For her incredible performance, the actress was nominated for numerous awards and received the ASTRA Awards for Outstanding Female Actress (2015).

In 2018, Cormack appeared on another Australian television series Jack Irish as Rory Finch.

From her career of over three-decades, Danielle Cormack acc u mulated an impressive amount of net worth. According to the Celebrity Networth, the actress has a handsome net worth of $5 million.

Cormack is a motorbike lover and is seen riding her motorbike frequently.

Danielle Cormack is in a romantic relationship with her partner Adam Anthony.  Her handsome and lovable boyfriend, Adam is a Canadian director and producer with whom Cormack met through a fellow actress Leeanna Walsman at Piha Beach on Auckland’s West Coast in 2013. After a while, the two came closer and eventually started dating.

The couple frequently appears together at the public event. As of September 2018, the lovebirds are maintaining a happy and healthy relationship.

Previously, the actress was married to a fellow actor Pana Hema Taylor. The two tied the knot in the year 2009, but after a few years, the Cormack and Taylor divorced in 2013. The former pair is parents to their son Te Ahi Ka Cormack Hema-Taylor born on 19 March 2010.

Cormack was also married to Hayden Anderson. With Anderson, she has a son named Ethan Cormack Anderson born in 1996.

Here's a video of Danielle Cormack.