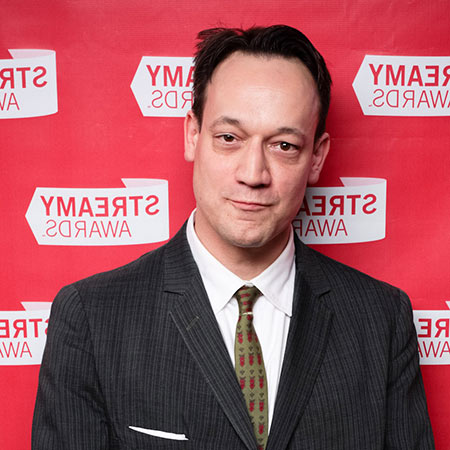 Spider-Man 3 star Ted Raimi is an American actor, director as well as writer. He is best known for his major characters as Lieutenant Tim O’Neilli in seaQuest DSV. Ted is also well known for his work in Ash vs Evil Dead and The Midnight Meat Train.

Ted Raimi was born on December 14, 1965, in Detroit, Michigan of United States of America. He is the son of Celia Barbara Abrams who is a  lingerie store proprietor and Leonard Raimi, a furniture store proprietor. He was raised in Conservative Judaism.

Ted Raimi belongs to American nationality and he is a Russian-American by ethnical descent. He graduated from Wylie E. Groves High School in Birmingham, Michigan. There he was popular as a DJ on WGHS and was actively involved in the Groves Cinema Society.

Ted was brought up with his three brothers and sister in his birthplace Detroit. His older brother Sam Raimi is a director and Ivan Raimi is a screenwriter.

Ted Raimi made his screen debut in short film It’s Murder! In 1977, before appearing in The Evil Dead in 1981. After that, he appeared in Twin Peaks as a Rusty in 1991. He then made his remarkable appearance in several TV series and famous movies as well including Masters of Horror, Supernatural, The Midnight Meat Train, and many others.

Ted Raimi has also done some short film, including  Torro. Torro. Torro., It's Murder, Cleveland Smith: Bounty Hunter. In 2006, he appeared as special agent Brown in High Hopes. He played a small part as Peter Savarino in 'Reign Over Me'. He was also seen in Kevin O'Neil's Attack of the 50 Foot Cheerleader.

In his successful acting journey, Ted Raimi also appeared in 'The Great and Powerful' along with Joey King, Mila Kunis, Rachel Weisz, and Michelle Williams.

Ted Raimi is an unmarried person. He is a person who is not comfortable with sharing his personal life with the whole world. Being one of the famous actors, Ted has also followed by a huge fan of girls even he isn’t involved in a relationship with anyone.

Besides his acting career, Ted Raimi loves dogs and he has one dog in his home. Furthermore, he is active on Twitter and Instagram. He has pictures with Nicholle Tom on his Instagram account that shows he shares a good bonding with her.

Ted Raimi has earned a good net worth from his acting career which is $750 Thousand. He has a height of 6 feet 2 inches and weighs 69kg. He has brown colored hair and brown eyes as well.