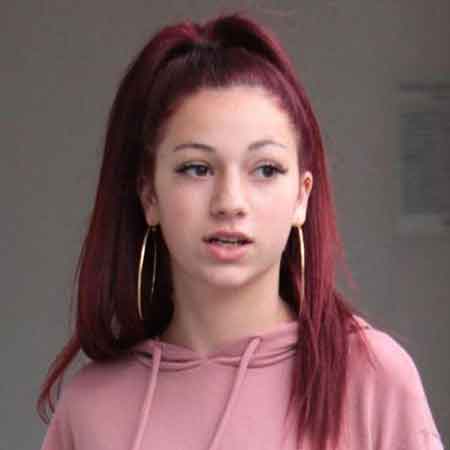 Danielle Bregoli famously known as Bhad Bhabie(Pronounced as 'Bad Baby'), is an American rapper and Internet personality. She rose to fame after she appeared in an episode of Dr. Phil in September 2016. In the show, she said a phrase "cash me outside, how 'bout dat', which became viral video meme and catchphrase. Bregoli is also a rapper known for her debut single "These Heaux" in 2017 which hit the Billboard Hot 100, making her the youngest ever rapper to appear on the chart.

Danielle Bregoli was born on March 26, 2003, in Boynton Beach, Florida under zodiac sign Pisces. She was born to father Ira Peskowitz and Barbara Ann Bregoli. His father is from Jewish descent and her mother is Italian.

Her father is a deputy who works for the Palm Beach Police Department. Bregoli's parents broke up while she was an infant and she was raised by her single mother.

Danielle Bregoli rose to fame after she appeared on Dr. Phil in 2016. On September 14, 2016, Bregoli and her mother were interviewed for the segment of an episode of the show. She was reappeared on the show in February 2017 where she appeared without the studio audience due to the response on her previous appearance.

Bregoli began her rap career in 2017.  In early 2017, she was signed by a product placement manager Adam Kluger in order to boost his reputation in the music industry.

Later on 26 August 2017, Bregoli released her first single These Heasux which picked the 77th spot on Billboard Hot music chart making her the youngest female rap artist to enter the Billboard Hot 100 chart.

After the success of her first single, the Atlantic Records signed her to a multi-album record contract. Later on, she released Roll-in Peace, Hi Bich, I Got It, Mama Don't Worry, Both of Em and many more. The Hi Bich reached number 68 on the Billboard Hot 100.

On May 2, 2018, Bregoli released the video of Gucci Flips Flops which ranked 80 on Billboard's Hot 100. She was nominated in 2018 Billboard Music Award in the category of Best Female artist for the music video along with Cardi B, Nicki Minaj, Camila Cabello and many more. Furthermore, she also received a gold certification from the Recording Music Industry of America for her single Gucci Flip Flops.

Rapper and television personality Danielle Bregoli earns a good amount of money from her work. As of 2018, the female diva has an astounding net worth of $3 million.

Bregoli's salary and her income from other endorsement are still under review, however, seeing her fame among the people, we can a s sume she has an impressive income. As of 2018, she has over 15 million followers on Instagram so we can speculate that she earns a considerable amount of money from social media posts.

Bregoli is very secretive personality regarding her personal life and relationship status. As of 2018, Bregoli is not dating any man.

Taking about her social media she has over 15 millions of followers on Instagram and over 516K followers on Twitter.