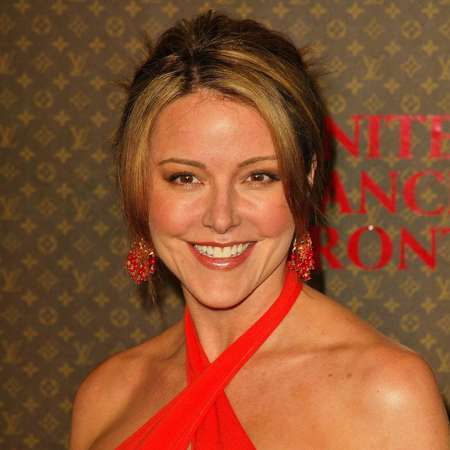 Daytime Emmy Award-winning actress Dana Barron is one of the prominent faces in the field of entertainment. She first came to the limelight following her major performance in a 1983 movie National Lampoon's Vacation. Her subsequent success includes Beverly Hills, 90210, Jonathan: The Boy Nobody Wanted, and In the Heat of the Night.

Barron has been dating filmmaker Michael Vickerman for a quite long time now. They have a son named Taylor.

Dana Barron was born on April 22, 1966, in New York City, United States, under the birth sign Taurus. She is the daughter of Joyce McCord, a stage actress and Robert Weeks Barron, a former director of commercials as well as a Congregationalist church pastor.

He also founded the first-ever commercial and soap opera acting for television school in the world  The Weist-Barron School of Television. Barron has also a sister named Allison Barron. She is the granddaughter of the opera singer.

Dana graduated from the Dwight School. She belongs to American nationality and regarding her ethnicity, she has a mixed ethnical background.

She earned New York University’s Stern School of Business with a major in business marketing. She received a certificate in Early Childhood Education from Santa Monica College. She also did a restaurant management course at New York University.

She volunteered as a teacher for United in Harmony- an organization that organizes summer camps for homeless and underprivileged children when she was at her graduation level.

Dana Barron started working in television commercials from an early age. Dana started her career professionally at the age of 10 doing TV commercials. The following year, she performed in Hiding and Seek on Broadway.

She even managed and opened a restaurant, Chumley’s in Greenwich Village for seven years. She also served as a part-time teacher at the New York City Zoo and Natural History Museum for sometimes.

In 1980, she made her film debut in He Knows You're Alone. In 1983, she appeared in a road comedy film, National Lampoon’s Vacation. She reprised her role of Audrey in the 20003 TV movie spin-off National Lampoon’s Christmas Vacation 2: Cousin Eddie’s Island Adventure.

The actress grabbed huge attention after she played the role in the movie National Lampoon's Vacation sharing the screen alongside Beverly D'Angelo and Christie Brinkley.

Dana is also the recipient of Daytime Emmy Award. She won the award for her breakout performance in the hit series No Means No. She subsequently appeared on the Fox series Beverly Hills, 90210, NBC movie Jonathan: The Boy Nobody Wanted, The Equalizer, In the Heat of the Night, Murder, She Wrote, and Babylon 5.

She is also the join the symphony pictures as Director of Development and co-produced her first film Seduced By A Thief.

In 2012, she appeared in Naughty or Nice was the highest rated cable movie of the year. In 2013, her 2013 TV film project, Snow Bride was released on the Hallmark Channel. Since then, she has not seen in many movies and television shows to date.

According to Celebrity net worth, Dana Barron has an estimated net worth of around $0.5 million. Her main source of income is her acting career.

Barron played the iconic role in a 1983 road comedy movie National Lampoon's Vacation which also became a box office success grossing more than $60 million in the US with an estimated budget of $15 million.

Moreover, she has been a part of a number of box-offices hit movies and some of them are enlisted below;

Dana Barron has been in a relationship with her longtime boyfriend, screenwriter Michael Vickerman. A few online sources also claimed that the two are married, nonetheless, neither of them have officially confirmed their marriage.

The power couple also is also proud parents of a son, Taylor Barron Vickerman, was born in 2006. She is a loving and dedicated mother and she loves being a mom which the National Lampoon’s Vacation star revealed in an interview:

I love being a mom, but part of my happiness comes from working, too. I’ve learned, though, that it’s okay to not have each project done perfectly.

In current time, Barron is busy with her career and personal life side by side and even she is planning to start her own professional development business very soon in collaboration with her spouse.

In the year 2008, the couple was seen in the TNT Wrap Party for The Librarian and Leverage.

Well, the former actress, Dana Barron has disappeared from the limelight but she is not dead. Due to her disappearance seceravl, peopla nd sources have claimed her to be dead but the news is false.