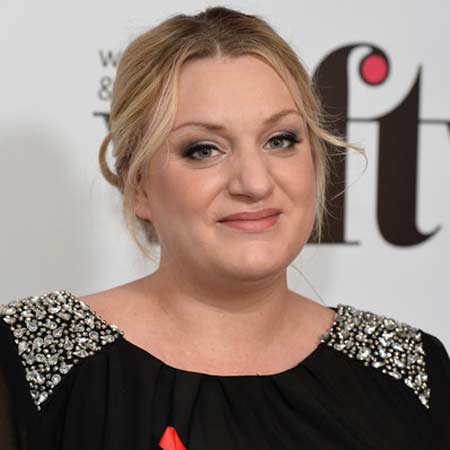 Daisy May Cooper is the BAFTA Award-winning actress and writer who is widely recognized from her role, Kerry Mucklowe in the BBC Three's mockumentary series, This Country. People highly appreciated her character on the show and considered of the most influential female characters on the television of the generation. Daisy and her brother Charlie Cooper are creators and lead actors of the show. Some of her other works include Kerry and The Wrong Man.

Early Life And Education Of Daisy May Cooper

Daisy May Cooper was born on 1st August 1986 in Cirencester, Gloucestershire. Cooper is Leo which defines her personality to be warm and action-oriented. She is British as per nationality and as far as her ethnicity is concerned, she is Caucasian. She has a brother, Charlie Cooper (an actor and a writer).

Regarding her academics, Cooper attended Powell's Primary School and Cirencester Deer Park School. Initially, she did stand-up comedy but nobody laughed at her jokes which gave her the confidence to join RADA (Royal Academy of Dramatic Art) drama school in London. From a very young age, she was interested in acting and writing.

Soon after the graduation, Daisy May Cooper got a job in medical comedy-drama series, Doc Martin as Young Mum. The series starred Martin Clunes, Caroline Catz, Ian McNeice and Selina Cadell. In the series, her three pages of dialogues were cut to a line during the editing process. She was highly disturbed by the incident.

Cooper then left all those things and returned back to her home with her brother. They shared a common bedroom in their parent's house. At that time they became totally hopeless about their career.

We felt that we'd been left behind. Having to come back to a village after going to drama school and university, and all of your peers have gone to London because they've done everything correctly.

Later, they started writing in the dark loft space above the garage. In 2014, she appeared in two episodes of the TV series, The Wrong Mans with Mathew Baynton, James Corden, and Sarah Solemani. She was unsuccessful to grab the attention of the audiences.

Fortunately, the same year, the duo wrote and acted in the Pilot for This Country, titled Kerry. The TV series was rated 8.9 stars out of 10 by IMDB and received a positive response from the fans.

The siblings came up with the idea of the mockumentary series, This Country. They started writing when they used to work as clearness in their hometown earning $120 per month.

CAPTION: Daisy May Cooper with Charlie Cooper in one of the scenes of This Country. SOURCE: Metro

Initially, the concept of This Country was dropped but after the several attempts, their series was finally aired on BBC Three on 12th February 2017. The real-life siblings played the role of cousins in the series. The story of the show is based on their real-life experiences.

All the material is based around stuff that happens in Cirencester. But when we went to the channel they thought that Cirencester was a bit too big and Northleach is a smaller village, and sort of isolates the characters a bit more. Makes them more claustrophobic.

The mockumentary not just entertain the audiences but also shows that young people are marginalized more than ever. Her strong character in the series was highly appreciated by numbers of audiences. She was even addressed as the best female character on TV.

After the success of the first series, the second series was aired from February 2018. The same year, she won a BAFTA Awards in a category of Best Female Performance in a Comedy Programme.

She along with Lucy Watson, Caroline Flack, and Louise Redknapp were listed in the worst dressed list of the event. Cooper wore an asymmetrical red dress with trim around the cuffs and neckline teamed up with an open toe red boots which were designed to look like football socks.

As of 2018, she again won British Academy Television Craft Awards in the category of Breakthrough Talent for her role in the series, This Country.

Daisy May Cooper's Net Worth

Daisy May Cooper has an estimated net worth of thousand dollars, however, the amount is not made public and is still under review. Cooper earns money from her acting and writing career. She has worked in many successful movies and TV shows.

As per some online sources, TV writer approximately earns $ $3k-$6k weekly whereas a TV star earns the salary ranges between $150k to $1 million in an average.

Besides, she is an ambassador of the Barn Theatre.

Who Is Her Husband; Does She Have a Baby Also

Daisy May Cooper is a private person and prefers to lay low when it comes to her relationship and dating life. She is also not active on social media like her brother.

CAPTION: Daisy May Cooper with her child. SOURCE: Instagram

According to the post shared by her brother in 5th January 2018, on his Instagram, Cooper is dating a mysterious guy named, Will Weston with whom she shares a baby girl.

Unbelievably thrilled to say my sister Daisy and her partner Will had a beautiful little girl last night. So happy. Baby Pip less so...

Cooper keeps her boyfriend and her child far from the limelight. Sources report Cooper and her partner Daisy have been together for a long time now.

Although there is a little known about their relationship, hopes the couple sharing a beautiful relationship with no such divorce rumors.