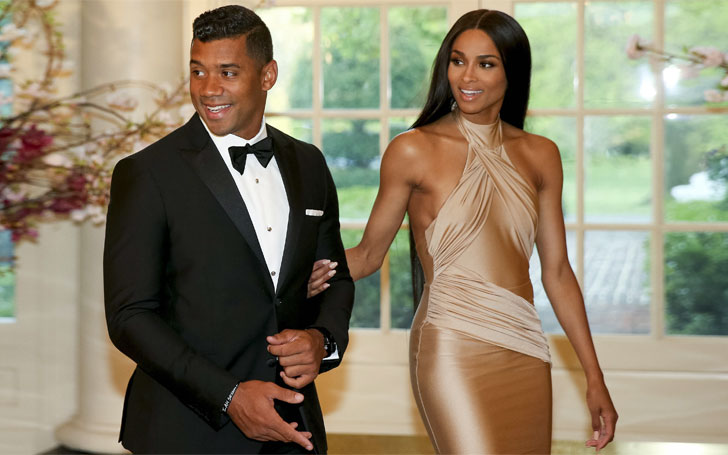 Seattle Seahawks' Russel Wilson and singer Ciara Harris have celebrated their first wedding anniversary on July 6, 2017. The couple shared their sweet anniversary celebration in a video where they featured the first glimpse of their newborn baby.

31-year-old singer Ciara and the 28-year old Wilson are living happily as husband and wife since a year. They also share their pictures frequently on social media; everything from romantic, traveling to baby pictures among others.

Singer Ciara and footballer Russel Wilson have reached their first milestone as husband and wife. The couple exchanged their vows on July 6, 2016, in a secretly organized ceremony at Peckforton Castle in Chesire, England.

They've also shared a video standing on the balcony of their mansion where they had a short kiss.

However, this wasn't the first experience of motherhood for the 31-aged singer  Ciara, she has a baby boy from her previous relationship with rapper Future.

Singer Ciara and Seattle Seahawks' quarterback Russell don't belong to the same trade but despite belonging to different professions, they are content with each other as a couple. The couple started dating each other in March 2015.

The lovely couple of Ciara Harris and Russell Wilson

People started to speculate about their relationship after the lovebirds were seen sitting next to each other at a Seattle Mariners game in April 2015. They continued dating for around a year before getting engaged on March 11, 2016.

They both remain quite busy with their profession, however, they still manage to share their quality time whenever they get any free from their job.

Well, it's not unusual to have some ups and downs in the relationship and they might have also gone through this, however, the good news is they haven't let it come to the media and ruin their relationship.