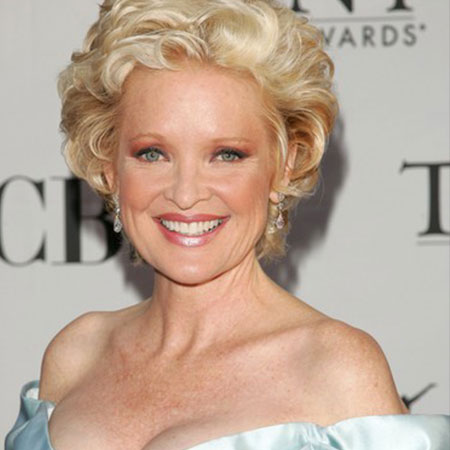 Christine Ebersole is an American actress best known for appearing on Broadway in the musical 42nd Street for which she won a Tony Award. She has starred on the TBS hit series Sullivan & Son. She has also received an Emmy Award nomination for her performance in One Life to Live.

Christine Ebersole was born on 21st February, 1953, in Winnetka, Illinois, the United States of America, to father Robert "Bob" Ebersole and Marian Esther.

Her father was the president of a steel company which was located in Milwaukee, Wisconsin. She is of American nationality and has Irish and Swiss-German ancestry. She doesn't have a sibling.

Christine has attended New Trier High School from where she completed her graduation in 1971. She has also studied ar MacMurray College in Jacksonville, Illinois. She learned acting from the American Academy of Dramatic Arts.

Christine made her television debut with the role of Lily Darnell on the ABC hit television show, Ryan's Hope, in 1977. She worked on the show for three years and appeared in 12 episodes.

She has since appeared on other hit television shows such as Rachel Gunn, R.N., The Hogan Family, One Life to Live, Sullivan and Son, The Cavanaughs, Gypsy and Ink.

Her last television appearance was Bob Hearts Abishola on which she played the role of Dottie alongside Billy Gardell and Chuck Lorre.

Christine made her film debut with the role of Linda on the 1982 comedy film, Tootsie. Her other movie credits are Richie Rich, The Wolf of Wall Street, Amadeus, The Big Wedding, Confessions of a Shopaholic and 'Til There Was You.

Being a successful Hollywood actress, Christine Ebersole earns a lot of money from the film and television industry. As per multiple online sources, the 66-year-old actress has an estimated net worth of $2.5 million.

As for her salary, online reports suggest that Christine earns $75,000 per year from her acting career. She reportedly has an expensive house in Maplewood, New Jersey.

Her last movie The Wolf of Wall Street was made under the budget of $100 million and the film had a total box office collection of $392 million. She had appeared on the movie alongside Leonardo DiCaprio and Jordan Belfort.

Moving towards the personal life of Christine Ebersole, she has been married twice in her life. She was first married to the All My Children actor, Peter Bergman. The former couple tied the knot in 1976 but ended their relationship with a divorce five years later in 1981.