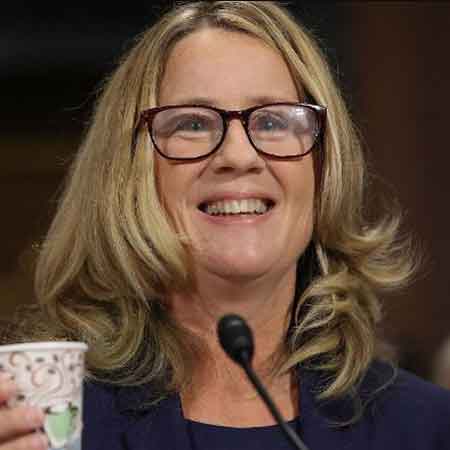 Christine Blasey Ford is an American professor of psychology at "Palo Alto University" who became famous after accusing former U.S. Supreme Court nominee Brett Kavanaugh of sexual a s sault. Ford and Kavanaugh both attended the same high school in the early 1980s when the alleged incident occurred. The allegation drew several controversies and became the headlines for months.

Christine Blasey Ford was born in November of 1966 to parents Paula K. and Ralph G. Blasey Jr. She grew up in the Suburban towns of Washington D.C. She grew up with two brothers; Tom Blasey and Ralph Blasey III. Ford attended the Holton-Arms School, a private, all-girls university-preparatory school in Bethesda from 1978 through to 1984.

As part of the regional sports team for diving, she got an opportunity to discuss the 1980 Summer Olympics boycott at the White House along with diver Greg Louganis.

Being a medical graduate, Ford has also worked with multiple pharmaceutical companies. She worked as director of biostatistics at a company, Corcept Therapeutics. Along with this, she has also collaborated with the US Food and Drug Administration. She has also authored and co-authored books on many psychological topics including depression. She also penned a book related to child abuse and the 9/11 attacks. She is also the co-author of a book titled How Many Subjects? Statistical Power Analysis in Research. She has been staying away from her teaching job after she came up with allegations against Brett Kavanaugh.

According to some tabloids, Christine Blasey Ford has an estimated net worth of around $300,000 as of 2018. As per some sources, an average professor in the U.S earns around $98,974 annually. As for her work with as a consultant at pharmaceutical companies, an average Pharmaceutical Consultant may earn  $101,000 annually.

As far as Christine Blasey Ford's personal life is concerned, she is a married woman and lives a very happy married life with her husband and children. She married Russell Ford in 2002 and they have 2 sons together. Further, she is also an aunt of actress and singer Bridgit Mendler. Ford is interested in politics and supports the Democrats. She has also participated in many protests and marched against Republican President Donald Trump. She participated in a March for Science where they protested against the Trump administration’s budget cuts to research.

In July 2018, Brett Kavanaugh was reported to be one of the candidates to be chosen as the Associate Justice of the Supreme Court of the United States. But in the meantime, Christine Blasey Ford claimed that Kavanaugh had sexually a s saulted her during their high school years when he was drunk. Ford immediately contacted The Washington Post and also sought help from the congresswoman, Anna Eshoo. On July 20, Eshoo met Ford and was convinced to her story. They both went to Senator Dianne Feinstein, the California senator. After this, Kavanaugh joined the list of high profile people such as Sylvester Stallone who was also accused of sexual misconduct.

CAPTION: Ford swearing on a Bible in the court. SOURCE:

Maintaining Ford's confidentiality, Feinstein did not reveal the issue in the initial Kavanaugh confirmation proceedings. But, he proceeded Ford's letter to FBI after The Intercept reported that Feinstein was withholding doc u ments related to Kavanaugh. Later, the FBI forwarded the letter to the White House which further pa s sed it on to the Senate Judiciary Committee.

On September 16, the media was able to track down the anonymous figure that accused Kavanaugh and then Ford's identity was revealed. The details that dated back to 1982 alleged that Kavanaugh then-17 held Ford, 15 held her down on a bed and groped her as well as tried to pull her clothes off while intoxicated. In spite of all these allegations, Brett Kavanaugh was appointed as the Associate Justice of the supreme court declaring all claims false. Kavanaugh was also accused of sexual hara s sment by a second woman named Deborah Ramirez.