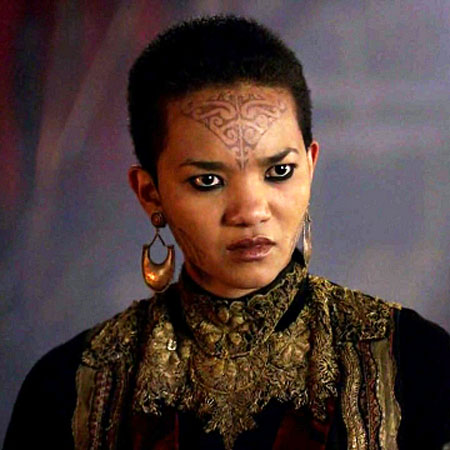 Chipo Chung is a Rada-trained Zimbabwean stage and screen actress best recognized for her portrayal of Mary Magdalene on the mini-series A.D. The Bible Continues. In 2011, she featured on the drama series ‘Camelot’ as Vivian. She also co-founded the charity ‘SAFE-Kenya’ along with Nick Reding.

Chipo Chung was born on August 17, 1977, in Dar es Salaam, Tanzania as a refugee, under the birth sign Leo. She is the daughter of Fay Chung and Rugare Gumbo. She lived in refugee camps stationed in Mozambique for the first two years to shelter from an on-going war in then-Rhodesia.

Chung grew up in Harare. There, she attended Dominican Convent High School. At that time, she also took acting lessons at the mixed-race theatre company Over the Edge. She moved to the United States with her mother when she was 18.

Chung belongs to Tanzanian nationality and ethnicity wise; she is of half Zimbabwean and half Chinese.

Chipo Chung began her acting career by performing in several political theatre productions, including ‘Taking to Terrorists’, ‘The Overwhelming,’ and ‘Fallujah.’ She featured in the two episodes of Doctor Who as Chantho and a fortune teller in Doctor respectively.

Chung featured in a 2005 drama film ‘Proof’ alongside Anthony Hopkins and Hope Davis as well. She later appeared as the voice of Icarus || in Sunshine. Besides, she also made her remarkable appearances in several TV drama series, including ‘The Last Enemy’ and Sherlock's episode ‘The Hounds of Baskerville.’

Chung later appeared as Trish Stoddart in the 2015 British television series Fortitude, alongside Dennis Quaid, Sienna Guillory, Stanley Tucci, and many others. She gained overnight popularity after portraying the character of Mary Magdalene in the mini-series ‘A.D. The Bible Continues,’ in 2015.

Chipo Chung is a successful Zimbabwean actress and activist who has earned a hefty amount of money from her acting career. According to some online sources, Chung has an estimated net worth of around $4 million.

Chung featured in a 2005 drama film Proof which received positive reviews from film critics. As of January 2012, the film scored a 63% by review aggregator Rotten Tomatoes, with an average rating of 6.4 out of 10.

The film grossed $193,840 for its opening weekend and made a box office collection of $14,189,860 worldwide whereas its production cost is over $6 million.

Chung is a co-founder of the charity SAFE-Kenya along with Nick Reding. The charity develops theatre in Kenya for social change, focusing on HIV education and abolishing clitoridectomy. She also works for the charity Peace Direct in support of Envision Zimbabwe.

Chipo Chung is unmarried yet. She is not dating anyone officially at present. Despite the popularity, she has managed to keep her love life away from the public attention.

Chung loves reading books, and her favorite writer is Nawal El Saadawi. Besides, Chung is also active on Twitter and has more than 4K followers in her account.