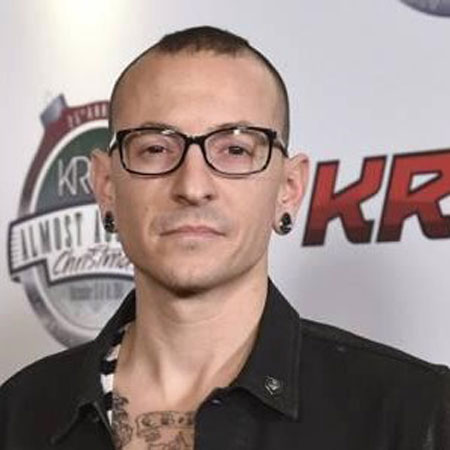 Chester Charles Bennington was an American singer and songwriter, recognized as the lead singer of the rock band Linkin Park. He was also the lead singer for Dead by Sunrise and Stone Temple Pilots from 2013-2015. He is also popular for his numerous all time hit songs, including, Numb, In the End, A Place for My Head, One Step Closer, and much more.

Chester Bennington was born on 20 March 1976 in Pheonix Arizona, to his father, who was a police detective, worked with child sex abuse cases, and his mother who was a nurse. Bennington has two half sisters and one brother named Brian. He is white American and holds American nationality.

During his young age, he was very much focused on music, as his early inspiration bands are Depeche Mode, and Stone Temple Pilots. He used to dream becoming a member of Stone Temple Pilots, later he became the singer of the band.

When he was at his age of eleven, his parents got separated, as his father gained custody of him. After his parent's divorced, Chester got addicted to marijuana, alcohol, cocaine, LSD, and opium.

Later he overcame his drug addiction and went on to future interviews to denounce drug use. Once, when he was on a Tour, he drank too much. In 2011, he said to have quit, as he said: "I just don't want to be that person anymore."

Once in an interview, he revealed that he had been a victim of sexual abuse from an older male friend at the age of seven. He was very afraid to ask for any help because he did not want others to think of him as gay. He said the abuse kept on going until he was at the age of thirteen.

The incident and his situation at home frustrated him so much that Chester felt like killing people and run away, to make himself comfortable, he wrote poetry, drew pictures and wrote songs.

After a few years, he told the abuser's identity to his father but decided not to carry on the case when he realized the abuser was a victim himself.

When he was at his age of seventeen, he moved in with his mother and was grounded inside the house, after his mother found his drug activity. Chester served at Burger King before he began his career as a professional singer.

Chester had so much darkness and pain in his past, that he was even bullied physically during his high school days. As he said in an interview " I have knocked around like a rag doll at school, due to his skinny and different looks.

Chester Bennington's career started as a singer with a band 'Sean Dowdell and His Friends?' they released popular three-tracks cassette in the year 1993. Later the group formed a new band called Grey Daze, a post-grunge band.

After releasing few songs with the band, he left the band in 1998 and moved in a search of another band.

Chester Bennington was freaked and almost ready to give up his musical dream when Jeff Blue, vice president of A&R at Zomba Music in L.A, invited him to an audition with the future members of the rock band Linkin Park.

He left his day job at a digital services firm and shifted to California along with his family, where he gave a great audition with Linkin Park, who was called Zero at that time. However, Chester managed to record his song for his audition in a day, sacrificing his own birthday celebration for the process.

Chester along with Mike Shinoda, another vocalist of the band, made impressive progress together, however they failed to record deal. After getting a lot of rejections, Jeff Blue, intervened again to help the band sign with Warner Bros.Records.

Later on, October 24, 2000, Linkin Park published their first album named Hybrid Theory. He along with Shinoda wrote the lyrics to Hybrid Theory based on some early material. Bennington later describes the song writing experience to Rolling Stone magazine in early 2002, "It's easy to fall into that thing- 'poor, poor me',.

"That's where the song including Crawling, came from: I can't take my self. But that song is about to taking responsibility for your actions," says Chester.

In the year 2013 February, Stone Temple Pilots parted ways with long-time singer Scott Weiland. The band replaced and trained Bennington to replace Weiland in May 2013. After that, the same year on 18 March, he took the stage at KROQ's Weenie Roast with the band.

The band released a free download song of their first single, Out of Time that featured Bennington through their official site.

Later he reflected on joining the Stone Temple Pilots, as he said " Every band has its own vibe. Stone Temple Pilots have this sexier, more classic rock feels to it. Linkin Park is a very modern very tech-heavy type of band. I grew up listening to these guys. When this opportunity came up, it was just like a no-brainer."

He said in an interview that singing lead vocals in Stone Temple pilots were his one of the biggest dream. He left the band on no good terms due to his commitments with Linkin Park in the year 2015.

Chester Bennington was a married man. He was married to Talinda Ann Bentley ( his third wife) in the year, who was a former Playboy model. They have three children together Tyler Lee Bennington (born March 2006), and twins Lila and Lily (born in March 2011).

Before his third marriage, Bennington was married to his second wife Samantha Marie Olit on 31st October 1996. They had one child together named Draven Sebastian, born on 19 April 2002. The couple got separated in 2005.

Bennington had a child named Jamie, born on 12 May 1996, with his early affair with Elka Brand. Later in 2006, Chester adopted Brand's other son named Isaiah.

Once, Bennington along with his wife was harassed by a cyber stalker named Devon Townsend for almost a year. Later Townsend was found guilty of tampering with couple's email, also sending threatening messages. Townsend later was sentenced to two years in prison.

Chester was also a tattoo enthusiast. He also did some works and promotions with Club Tattoo parlor in Tempe, Arizona. The owner of Club Tattoo is Sean Dowdell, Bennington's friend since high school.

In the year 2011, January, Bennington said in an interview in response to the 2011 Tucson shooting "There's a non-violent way to express yourself and get your point across-regardless of what you're saying or what your point is.

In a free society, every people have a right to believe whatever they want to believe. That their business and they can speak their mind...but nobody, even in a free society, has the right to take another person's life ever. That's something that we really need to move beyond."

Bennington had also tattoos all over his body.

Chester Bennington was plagued with poor health issues during the makeup of Meteora, as he struggled to attend some of the album's recording sessions.

Later in the summer of 2003, Bennington started suffering from extreme abdominal pain and gastrointestinal issues during his filming video for Numb in Prague. He was forced to return to the United States for surgery and filmed the remainder of the music video in Los Angelos.

In the year 2007, Chester sustained a wrist injury while attempting to jump off a platform during a show in Melbourne at the Rod Laver Arena. Besides the injury, he carried on to perform the entire show with a broken wrist, before going to the emergency room, as he had five stitches.

Bennington again fell ill in 2011, and Linkin Park was forced to cancel three shows and later rescheduled two from the A Thousand Suns World Tour. He injured his shoulder during the band's tour in Asia and was advised by doctors to have immediate surgery.

He had so many injuries till his lifetime, as in 2015 January, he injured his ankle during a basketball game. Bennington tried to cope with the injuries and perform with the aid of crutches, also knee scooter. Later the band canceled the remainde3r of their tour to allow Bennington to undergo surgery and recover.

Chester Bennington's Death At the age of 40

Chester Bennington was found dead at his home in Palos Verdes Estates, California. The apparent cause of death was suicide by hanging, as his housekeeper found the body around 9 a.m. PDT on 20th July 2017.

Later his bandmate, Shinoda confirmed his death on Twitter, posting "Shocked and heartbroken, but it's true. An official statement will come out soon as we have one.

His death occurred on Chris Cornell's 53rd birthday, one of his closest friend, who also died of suicide by hanging two months ago. Cornell's death might have left a deep wound in his heart that led Chester to take such a step. He was also the godfather of Cornell's son, Christopher.

He had suffered from depression for a long time and also battled against his drug and alcohol addiction. In his last interviews, Chester spoke about the problems he faced and encouraged other people suffering from depression to speak out about it.

On 21 March 2018, his wife and Linkin Park bandmates tribute him on his 42nd birthday.

Chester Bennington's Net Worth And Earnings

As an American singer, songwriter, and actor, Chester had a net worth of $ 30 million. Some of his songs are still at the top of the chart, which helped him become more financially successful and popular.

In the year 2000, the lead vocalist collected around $27 million from the album Hybrid Theory with the American rock band, Linkin Park.

Five Fast Facts about him