Charlotte Jackson Married To Chris Coleman And Living Happily With Their Children, Details Of Their Relationship 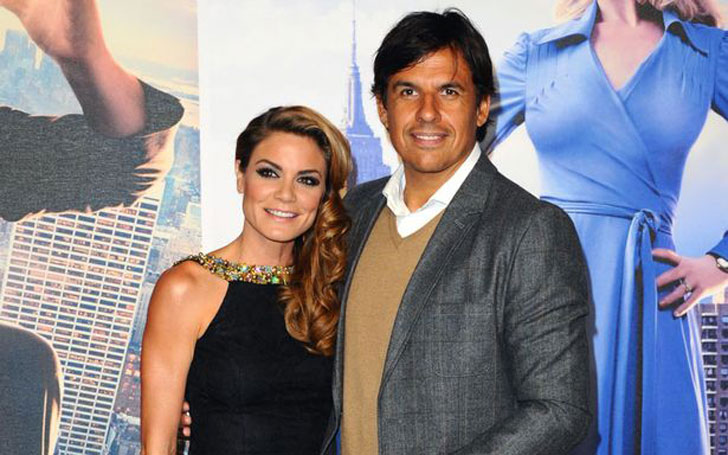 Charlotte Jackson, English TV presenter and journalist is currently committed to Sky Sports News as a presenter itself. Her dedication and hard work could be clearly seen while she worked for sportal.com, TEAMtalk, and Football365.

Her love life is also equally amazing as she fell in love with sportsman Chris Coleman when she interviewed Coleman in 2012 after he won a golf tournament in Portugal. Well, isn't that cute? At present, the couple is living a happily married life blessed with two adorable kids.

The couple exchanged vows in front of close friends and friends in an intimate event at Charlotte's family home in Hamshire in May 2015.

The couple, blessed with two kids, Finlay Coleman and Sonny Coleman were first introduced to each other in 2012. It was the moment when the blonde beauty interviewed the football star after he won a golf tournament in Portugal.

Chris is very happy to be with Charlotte. During an interview, Chris said,

In my career, I was always known as a player who punched above his weight and I think I’ve done that with Charlotte. I’m absolutely delighted.

The couple's happiness doubled when the couple welcomed their second child.

'Eventually, our little girl made an appearance this lunchtime'.

The pair, who are now parents of two have appreciable relationship goals. They currently reside in a four-bedroom house in Hamshire.

We just wish the pair all the luck for their future.

The couple lasted together for 19 years and their happy married life turned to be a nightmare for Belinda. She took the crucial decision to take a break in 2011.

Chris and Belinda on their wedding day

The football star's estranged wife once revealed that he evicted her and their four kids while planning to marry the Sky Sports beauty. It was the moment when Charlotte was pregnant with Chris's first baby.

Chris gave two months time to Belinda to leave the residence as Coleman was planning to liquidate some of his property to pay debts of more than £500,000.

Belinda and her kids were kicked out from the flat

Belinda was fully committed to the relationship but it was Chris,47, who had been cheating on his wife since 2011. She spilled the beans with Mirror,

I’d like to wish Chris and Charlotte the best. I’d like people to believe I am not bitter about our relationship ending.

But I am upset the ­children and I are losing our home while Chris lives in a four-bedroom house, and excitedly talks about his new baby. It’s time he remembered about our children and not just the unborn one.

She even explained how he met the gorgeous TV presenter Charlotte in 2012 and how he planned to marry her.

We can say, Belinda is a strong lady as she is living her life the best way with her kids. She even warned Charlotte,

He’s an adulterer and I just became bored of his indiscretions.

His affairs were into double figures. And I’d even confronted three or four of the women. I never ranted at them. I just told them they weren’t the first and they wouldn’t be the last.

She gave it her all to keep the marriage alive but failed at last. We wish all the very best to Belinda for her future.