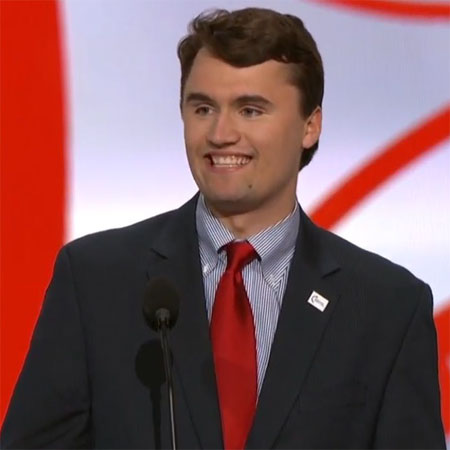 Charlie Kirk is the Founder and Executive Director of Turning Point USA, a movement whose mission is to identifying, educating, training, and organizing students to promote fiscal responsibility, free markets, and limited government. The non-profit organization is rapidly becoming one of the most prominent figures on the right today. He was a frequent guest on Fox News, Fox Business, and CNBC.

Who Is Charlie Kirk?

Charlie Kirk was born on October 14, 1993, and this makes his age 25 years at this time. Regarding nationality, he is American and is white as per his ethnicity. His zodiac sign is Scorpio.

Charlie was raised in Wheeling Illinois. In 7th grade, he worked as a volunteer for Mark Kirk, who is an American politician. During his high school years, he worked on Kirk’s Senate campaign.

Upon high school graduation, Charlie dreamed of attending the US Military Academy but he entered into the political world after he was rejected from West Point. Later, he moved to Baylor University.

In 2012, Charlie Kirk has written an essay for Breitbart titled ‘Liberal Bias Starts in High School Economics Textbooks.’  He gained national attention for his essay, made an appearance on Fox News.

At Benedictine University on “Youth Empowerment Day,” he met Bill Montgomery, who motivated him to skip Baylor and join political as his career.

Charlie Kirk founded the non-profit organization Turning Point USA, in 2012 even at the age of 18. He met a prominent Republican donor Foster Friess at the 2012 Republican National Convention and persuaded him to finance the organization.  The organization is rapidly becoming one of the most prominent figures on the right today.

Charlie represented his organization on over 1200 high schools and college campuses nationwide and over 150 full-time staff.

Besides, Kirk also joined the campaign of Donald Trump 70 days prior to the 2016 election.

Furthermore, Charlie also made an appearance as a guest several times on Fox News along with Marth MacCallum, CNBC alongside Robert Pisani, and Fox Business News.

Charlie Kirk has made a decent amount of money from his career. He has an estimated net worth of $2 million, according to celebrity net worth, in 2019.

Kirk serves as an Executive Director of a Non-Profit organization that is based in the United States.

The details of Turning Point's revenues are listed below

On 9 October 2018, Charlie published the book Campus Battlefield: How Conservatives Can WIN the Battle on Campus and Why It Matters. It is priced at $9.99 for Kindle and $15.26 for Hardcover on Amazon.

He has maintained a fortune of wealth from his career earnings. He owns a house in Phoenix, Arizona where the median price of the mansion is more than $211,300.

Despite his charity work all over the world, Charlie Kirk was also involved in numerous controversies. He made headlines after his erroneous claims about the family of the alt-right commentator Candace Owens. He claimed that Owens' parents were alcoholics.

In addition, Kirk praised Kanye West after he became the on-and-off Donald Trump fanboy. But the world's leading contemporary recording artists Taylor Swift criticized him after she made her endorsement deal with Tennessee Democrats Phil Bredesen.

Kirk has also a good friendship with Donald Trump Jr.

Is Charlie Kirk Dating Anyone?

The 26 years old Charlie Kirk has is not married yet and has yet to introduce anyone as his girlfriend. Despite his tremendous fame and fan following, Kirk has never talked about his relationship and love life.

Probably, he is single. He has never talked much about his private life to the media, so it is extremely tough to found his secrets. As of now, Charlie is utterly focused on his career.

Charlie is the author of Time for a Turning Point: Setting a Course Toward Free Markets and Limited. He served as the youngest speaker at the 2016 Republican National Convention and was a proud eagle scout.

Charlie lived with his parents until 2015. And as of now, he resdies in Phoenix, Arizona.