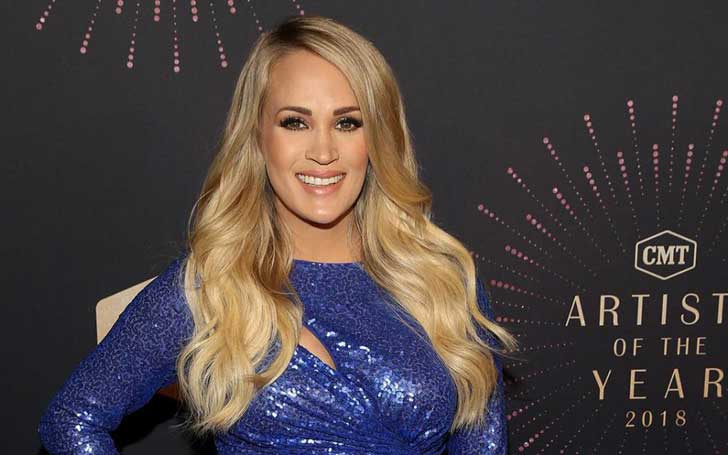 Carrie Underwood is expecting her second child, a baby boy with her husband Mike Fisher. The 35-year-old singer made the big announcement during the opening of the 2018 CMA Awards on Wednesday, 14th November.

The revelation came when Underwood complimented her co-host, Brad Paisley. She said,

Brad, have you been working out?

Then the 46-year-old songwriter replied, "And you have really let yourself go." After she made it clear that she is expecting a baby to Paisley, he reminded her of the incident when he accidentally revealed her first child's sex. He said,

Hey, remember last time when I accidentally revealed the gender of your baby?

Then Underwood replied saying "I mean, who could ever forget #BradBlewlt?" Then Paisley requested his co-host to spill a little more about her baby. He said,

Seriously Carrie, give me a little baby hint? Johnny or June? Keith or Nicole. Garth or Trisha. Tim or Faith. George of Tammy. Waylon or Willie?

Finally, Underwood said "Oh my gosh-Wilie, it's a Willie ok!?

Following the revelation, the crowd gave her a congratulatory round of applause. Then, Paisley got serious and said,

Having two kids, - and two boys - myself, actually I know a new arrival can be tough on the new kid. So, as a little surprise, I've asked Carrie's firstborn son to come out for a very special moment in the CMAs spotlight.

Fans have speculated Underwood is expecting a daughter with Fisher after she wore a pink jacket in her pregnancy announcement. She announced her pregnancy in an Instagram video where she showed balloons spelling out "BABY" above her head.

Ooh baby do we have a bundle of info to share with you! Click here for info on The Cry Pretty Tour 360! #CryPrettyTourBundle #CryPrettyTour360 #CryPrettyAlbum @CALIAbyCarrie http://www.carrieunderwoodofficial.com/

The lovebirds, who got married in July 2010 already have a son Isaiah Michael,  3½. Previously, in an interview with CBS Sunday Morning, Underwood said that she suffered three consecutive miscarriages in last two years.