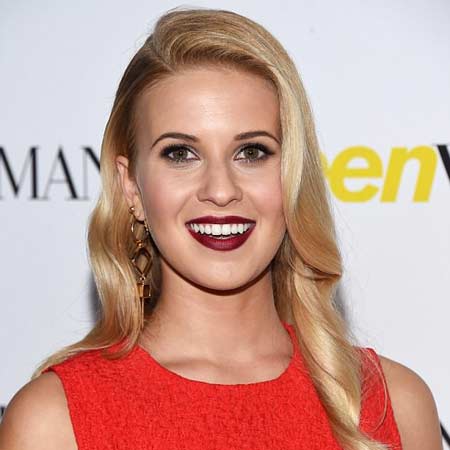 Caroline Sunshine popular as Barbara Winslow in the family film, Marmaduke is an undeniable Hollywood talent. She has quickly become "one to watch" in the entertainment industry over the years through her acting which brought life on screen. She is also known as a dancer, singer, and political operative who currently work as a White House press assistant for U.S. President, Donald Trump.

Caroline Sunshine was born Caroline Mohr Sunshine on September 5, 1995, in Atlanta, Georgia, to parents Thom Sunshine and Karen Sunshine. She was raised in Orange County, California along with her younger brothers, Johnny Sunshine and Christopher Sunshine.

Sunshine started learning ballet at the age of 3 and landed her first role in a kindergarten play. Later, she continued her acting with the Orange County Children's Theater and dancing with the South Coast Performing Arts studio in Tustin, California.

CAPTION: Carolina Sunshine along with her family SOURCE: Parenting

Caroline Sunshine started her theater career in 2004. Some of her stage credit includes Annie Warbucks at the Orange County Children's Theatre, The Nutcracker at the Academy of Dance and South Coast Performing Art. In 2006, she landed her first role in a commercial for Amazing Allysen. She made her TV debut in CBS sitcom, Team Spitz in 2010.

Sunshine landed her major role in Disney Channel original series, Shake It Up, starring Bella Thorne, Zendaya Coleman, Davis Cleveland, Roshon Fegan in fall 2010. She played the role of European exchange student, Tinka Hessenheffer and was associated with the series until its final episode in November 2013. The following year, she performed the lead role of Campbell in the Non-Equity national tour of Bring It On the Musical.

Caroline Sunshine filmed a Freeform pilot called Recovery Road in 2014 which was based on Blake Nelson's novel. She also appeared in 2015 film, The Outfield. She enrolled in politics in January 2018 as a White House intern later she got a full-time job as President Donald Trump's press assistant by mid-March, 2018.

Caroline Sunshine is a rising Hollywood star who garnered massive popularity at a short span of her career. She has an estimated net of $2 million. She earned $90k-$100k for her appearances in movies and TV series. She also worked as a press assistant at White House and her salary is above $50k.

In 2010, Sunshine featured in the family comedy film, Marmaduke which grossed $83.8 million at the box office against the budget of $50 million.

Caroline Sunshine is possibly single at the moment. She is quite ambitious and career-oriented which might be the reason she is never a part of rumors and link ups. She is a fun loving person as she loves to spend her leisure time dancing, traveling, baking, as well as outdoor activities such as going to the beach, surfing, snorkeling, and rafting.

This gown is the vision of two 22-year-old women who found each other through a Google search. Thank you @mgarrison.design for taking a risk and creating a piece that boldly celebrates our right to publicly and passionately disagree with each other. May we all cherish the freedom to laugh at, think for, and speak for ourselves.

Sunshine became the spokesmodel for the teen fragrance, "Puppy Love 4 Girlz" in 2011 which helped homeless dogs and puppies. The same year, she was named one of Dream Magazine's "Top 16 Under 16". She is quite active in several other charitable causes like  "Joyful Sewing Organization", "Working Wardrobes", "Adopt A Hero",  "Loaves and Fishes Ministry" and  "Thirst Project".

Sunshine has just joined Instagram in May 2018 and already she has 234k+followers.

Below we present the video of Caroline Sunshine.