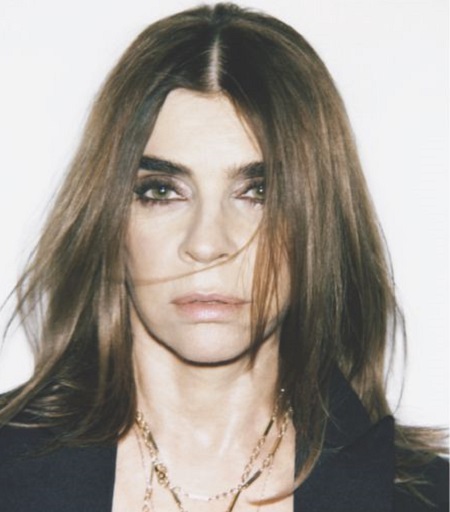 Carine Roitfeld is a famous French fashion editor, writer, and former fashion model who is the former editor-in-chief of Vogue Paris. The fashion editor has been enjoying over five decades' long relationship with partner Christian Restoin. They are yet to get married.

Carine was born on 19th September 1954 and is 66 years old, as of early 2021. She was born in Paris, France, and belongs to French nationality. She was born to father, Yakov Motelevich.

Her father was born in Belgorod-Dnestrovsky as one of the five children. He received his law degree in St. Petersburg. He immigrated to Russia at the age of 34 and moved to Australia. Yakov is married twice. He welcomed two children from his first marriage. Carine was born to Yakov and his second wife. The name of her mother is not known; however, Carine explains that her mother is a classic Frenchwoman.

Carine was eighteen years old when she started her modeling career. While explaining her early career days, the fashion model revealed that she was booked for only junior magazines. She then became a writer and stylist for French Elle.

While Carine was actively working as a freelance stylist, her daughter Julia appeared in a children’s fashion shoot for Bambini in 1990.

The 66 years old editor then started working as a consultant and muse to Tom Ford at Gucci and Yves Saint-Laurent. She worked for around six years. In 2001, Conde Nast’s International Chairman Jonathan Newhouse approached her to edit Vogue Paris. In 2006, there were rumors that Hearst Corporation approached her to take over Glenda Bailey’s editor-in-chief position at U.S. Harper’s Bazaar.

After working for ten years, Carine resigned from Vogue Paris on 17th December. She resigned to concentrate on personal projects. The 2013 documentary Mademoiselle C documents the launch of her magazine, CR.

Working in the field for almost five decades, Carine has definitely collected a high figure of money. As of 2021, Carine’s net worth is reported to be around $5 million.

Carine is not married at all but is in a long-term relationship with partner Christian Restoin. It is not clear how and where they got together, but they began dating in the late 1970s. Since then, the couple has been living happily together.

Carine’s first kid, daughter Julia Restoin Roitfeld, is a rising French creative director and designer. She studied at Parsons School of Design and graduated with a BBA in Design Management in 2006.

The creative director is currently dating Tim Wheeler, singer-songwriter and guitarist for Northern Irish alternative rock band Ash. They have been together since 2018. She is the mother of a child, daughter Romy, born in May 2012.

Carine’s son Vladimir is a popular French-American businessman and is the President of CR Fashion Book Ltd. She studied at NYU and later attended the University of Southern California School of International Relations and Cinematic Arts.