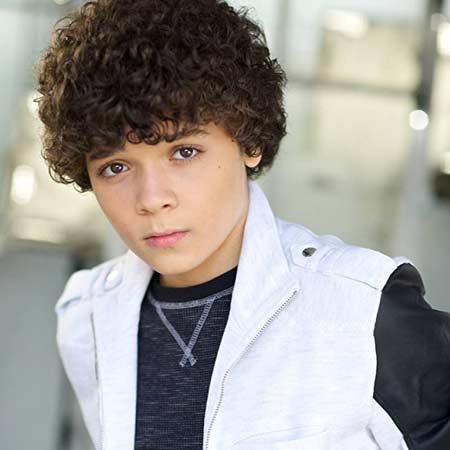 American actor, Cameron Ocasio popular as Dice Corleone (a fun loving guy who knows every gossip) from 2013’s Nickelodeon series, Sam & Cat was also a part of Law & Order: Special Victims Unit as Nico Grey. Besides, he is also known for his work in A Gifted Man and a supernatural horror film, Sinister.

Cameron Ocasio was born on 7th September 1999 in Long Island, New York. Ocasio is Virgo which defines his personality to be hardworking and efficient. He is American by nationality and belongs to White ethnicity/race.

Me and my family from my sisters sweet sixteen party

His parents raised him with his older brother and a younger sister, Gianna. He has a black belt in martial arts. In 2017, Ocasio completed his high schooling.

Cameron Ocasio started acting at an early age from the International Modeling and Talent Association.

Ocasio made his Hollywood debut in 2011 from the movie, Caught as Young Kevin. The following year, he back to back appeared in three movies Love Magical, Sinister and Child Eater. In the movie Sinister, he shared the screen with Ethan Hawke, James Ransone, Nicholas King, and Juliet Rylance. As of 2018, he worked in a short film, The One.

Ocasio made his TV debut in 2011 from police procedural TV series, Law & Order: Special Victims Unit. The series starred Mariska Hargitay, Ice-T, Christopher Meloni, and Richard Belzer. His performance in the series was highly appreciated and which helped him to gain public attention.

The next year, he worked in CBS’s TV series A Gifted Man with Patrick Wilson, Jennifer Ehle, Margo Martindale, and Rachelle Lefevre. The series was premiered on CBS on September 23, 2011, which is about the a talented but self-absorbed surgeon. In 2013, he worked as Dice Corleone (a cool, calm guy who knows every tenant and gossip) in Nickelodeon teen sitcom Sam & Cat. He was associated with the series from 2013-14 appearing in 35 episodes. The series starred, Ariana Grande, Jennette McCurdy, and Dan Schneider.

Cameron Ocasio is one of the rising Hollywood stars who has maintained a good sum of the amount from his acting and singing career. He collects an impressive amount from his acting career and maintains a lavish lifestyle. So far, Ocasio starred in numerous movies and TV Series. As of 2018, he has an estimated net worth of thousand dollars, however, the amount is yet to reveal.

This is too funny there already to go!!

The young and talented actor, Cameron Ocasio earned a huge fan following at the very short period of time. He is active on Twitter and Instagram. He is possibly single at the moment, he is just 19 years old and at the highest peak of his career which might be the reason, he hasn't invloved in any kind of romantic relationship.

Scrolling his Instagram account, he is close to Jennette McCurdy (American actress) and shares a strong bond with his friends and family.

Ocasio is active on the social media and has an impressive fan following. As of 2018, he has over 131k  + followers on his Instagram where he shared about her personal and professional update with his fans and well wisher.

Here is the video where Cameron Ocasio talks about his career and life: