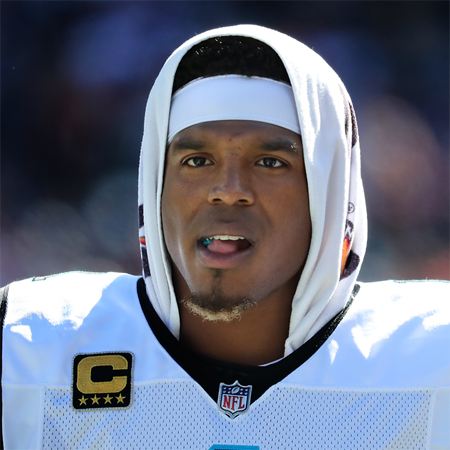 Born and raised in Atlanta, Cam Newton is currently playing for the Carolina Panthers of the National Football League. He won the Heisman Trophy at Auburn University, the only modern-era player to have achieved it. He also became the first rookie quarterback in NFL history to throw 400 yards in his NFL regular-season opener, shattering Peyton Manning's rookie record.

Newton also made a significant impact during his college football career. Rivals.com announced that he was listed as the No. one quarterback from either high school or junior.

In 2011, he became the Rookie of the year and in 2015 was named to NFL All-Pro First Team. He is also a three-time Pro Bowler. As a successful footballer, Newton garnered a tremendous amount of money from his career.

Newton has been dating his longtime girlfriend, a former model Kia Proctor. The couple also shares two children together, though the two are still unmarried.

Born on 11 May 1989, in Atlanta, Georgia, to Cecil and Jackie Newton, Cam Newton is the second of three sons. He is from an athletic family where physical activities and hard work were given much importance. Hence, he showed a keen interest in sports at a young age.

Regarding his ethnicity and nationality, Newton is a Black American. He attended Westlake High School in Atlanta where he was heavily involved in sports. At the age of 16, he had a record of pa s sing 2,500 yards and 23 touchdowns and running 638 yards and nine touchdowns which got the attention of college football scouts from throughout the country.

Joined the University of Florida,

At the time, Newton played for the Westlake Lions high school football team. He had also received scholarship offers from several prestigious universities, including Florida, Maryland, Georgia, Ole Miss, and Oklahoma, among other college football powerhouses.

At the beginning of his senior year, Newton eventually made the decision to join the University of Florida, becoming a member of the top-rated recruiting class in the country for 2007.

Cam Newton attended the University of Florida at the start of his senior year of high school and became a member of the Florida Gators football team in 2007 and 2008. As a freshman in 2007, he defeated fellow freshman quarterback John Brantley for the spot as a backup for Tim Tebow, who went on to win the Heisman Trophy winner in 2007.

Newton’s performance as a freshman was excellent, rushing 16 times for 103 yards and three touchdowns. He gained honorable mentions from several publications. The following year, he wasn’t able to play the entire season after suffering an ankle injury and took a medical redshirt season.

Controversy and Move to Blinn and Auburn

On November 21, 2008, Newton was arrested on felony charges of burglary and larceny as he was accused of stealing a laptop from another student of the University of Florida. The court ordered him to complete a diversion program.

Talking about the punishment, the athlete said one should not be judged by a mistake and given a second chance. Subsequently, he was suspended from the team and the incident scarred his reputation as well.

Three days before the Gators won the national championship against Oklahoma, Newton announced he was transferring from Florida. He made his transfer to Blinn College in Brenham, Texas, in January 2009.

By that time, Newton revived his reputation as one of the most dynamic amateur quarterbacks throughout the nation, leading his team to the 2009 NJCAA National Football Championship. During his career at Auburn, he became a dominating force and led the team to the 2010 BCS National Championship.

Newton also became the Southeastern Conference Player of the Year and the AP Player of the Year. He is the third player to win the Heisman Trophy and the only modern-era player with that honor.  During the 2010 football season, he spent half of his season embroiled in controversies about allegations that the quarterback’s father had sought a decent amount of money in return for his son playing for a major college football team.

On November 30, NCAA found evidence against Cam’s father Cecil Newton that he allegedly solicited $120,000 to $180,000 to the Mississippi State for his son’s athletic service, a violation of amateurism, after which Auburn declared Newton ineligible to play.

Denied the exchange of money

Auburn officials denied the exchange of money and immediately filed to have him reinstated on grounds that Kenny Rogers could not be considered an agent and Newton was not aware of his father's deed.  The following day Newton was reinstated claiming a lack of evidence that neither Cam Newton nor anyone from Auburn had knowledge

Cecil Newton was allowed to play in the 2010 SEC Championship Game. Following a 13-month investigation, in October 2011, NCAA concluded that his father Cecil only solicited a cash payment from Mississippi State and no other institution attempting to recruit his son.

Cam started his professional career by signing a four-year contract, worth over $22 million, with the Carolina Panthers, on July 29, 2011. He broke the rookie record of Peyton Manning by pa s sing 422 yards in his debut match against Arizona Cardinals, on September 11. However, the team lost the match despite his brilliant performance.

Cam tasted his first victory with the Panthers, against the Jacksonville Jaguars throwing for 158 yards and 1 touchdown. He played brilliantly for the rest of the season and received Offensive Rookie of the Year and Pepsi NFL Rookie of the Year.

Newton made an agreement with Carolina Panthers signing a five-year, $103.8 million contract extension, on June 2, 2015. He also became one of the best players on the team. He led the team to earn their first 6–0 record in franchise history winning over the Philadelphia Eagles. He was named NFL, MVP, on February 6, 2016.

During the 2016 season, Newton completed 52.9 % passes which were his career-worst in that category. He has had a great season as he finished with 3,302 pa s sing yards, 22 touchdowns, 16 interceptions, and a career-high 754 rushing yards.

According to Celebrity Net Worth, Cam Newton has an estimated net worth of around $75 million, as of March 2022. As per the same source, Newton’s estimated salary as of 2018 is around $20 million.

On July 29, 2011, Newton signed a four-year contract with Carolina Panthers worth $22 million. During the off-season, he became one of the highest-paid quarterbacks in the NFL after signing a five-year contract worth $103.8 million.

As he is still under the rookie contract his base salary is $1 million.  Although combined with his signing and roster bonus he rakes in around $31 million per season. Prior to the NFC Championship game, he made considerable sums of money $10 million from endorsements.

Newton made another $1 million from his endorsement deals after beating the Arizona Cardinals which earned his team a trip to the Super Bowl. He purchased a 3,285 square feet home for $ 1.6 million, in 2012, in Charlotte, New York City. The mansion features 3 bedrooms and 3 baths.

According to a report by TMZ, Newton lived for a couple of months as a tenant in the house of Stacy Keibler, a former professional wrestler. It was reported that Newton damaged over $100,000 during his stay. And later Stacy sued him for $270,000 which include $180,000 in lost rent while repairs were being made.

Newton is the proud owner of several luxurious cars some of them are listed below.

American footballer Cam Newton is in a relationship with former model and stripper Kia Proctor since 2013. The couple first met at the Kentucky Derby, in the same year. After a year, they were seen together at NFL’s post-season awards ceremony.

Though Newton and his longtime girlfriend Proctor are not married they are in a live-in relationship. They welcomed their first son, Chosen Sebastian Newton on December 24, 2015. Newton announced the birth of their first child through Twitter in December 2015, stating:

“My longtime girlfriend and I were extremely blessed to have a son last week. Our family is excited and thank you all for the good wishes!”

The pair welcomed their second child, a daughter Sovereign-Dior Campbell Newton, on February 3, 2017. It’s been more than a half-decade since the couple has been together and living happily with their two children.

Newton was involved in a tragic car crash in 2014 which gave him two back fractures, but he miraculously made a full recovery within twelve days.

Here is the video in the EverythingTop10 about Newton's ten amazing facts.