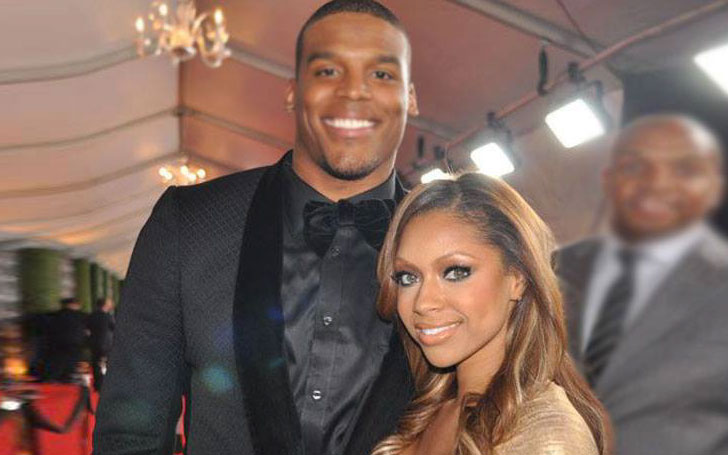 NFL Star Player Cam Newton has been dating Kia Proctor since 2013. In their 4 years long relationship, they've managed to have two babies already. Quite the baby makers this couple eh?

The Carolina Panthers quarterback celebrates being a new father in quite unique ways. After the birth of his first kid at Christmas Eve 2016, Cam wore a T-shirt with a cartoon version of him and his son dabbing during his super bowl game.

You won't believe what Newton did to celebrate the birth of his second child, his daughter was born a year later. It was big and emotional! And you don't want to miss it. We have all the exclusive details right here.

Their first kid was born on the Christmas Eve of 2015 but his girlfriend Kia was pregnant in the middle of the football season (i.e 2016 super bowl). But even an expressive person like Cam hid the news very well as he did not want anyone to focus on anything else but the game.

Cam Newton with his baby

Even though Cam tried to hide it, there were some hints that the fans and friends picked up as there were some unusual behaviors that the NFL star showed such as; he was leaving the game early, he had a different touchdown dance which was similar to rocking the baby to sleep. Here's one of it;

But the secret was revealed and all the confusion was cleared after the Carilion quarterback and his model girlfriend were blessed with a son. Along with that he also told why he did not want anyone to know about the baby on board.

I’ve been quiet about this because I didn’t want to create a distraction for my team and appreciate the privacy in this joyous time.

A great father as well as an amazing team member!

Don't miss this video that this NFL star posted on his Twitter.

This promise I tell you. pic.twitter.com/UdxxD8JYl9

The second child was a baby girl who was born on April 2nd, 2017 and the parents named their baby girl Sovereign-Dior Cambella Newton.

With almost three years of relationship and two kids, Cam's fan wanted to know when will he get married with his girlfriend. Let's find out what he has to say about it.

When Will The Father of Two Cam Newton and His Girlfriend Kia Proctor Get Married?

It's a question that this NFL star gets a lot and with all those people so concerned about his relationship and personal life he was once pissed off and answered the question very rudely saying,

It's none of your concern

So, the answer to the question is something which we will know if and when it happens.  If they want to stay together and just keep having babies, that's their decision to make!

Even though Cam is an expressive person, he tried to hide the relationship between him and his girlfriend Kia Proctor that is until they were spotted at the 2013 Kentucky Derby.

How hard the couple tries to hide their personal life there will always be something that will lead the fans to know the fact. For more updates on the topic and celebrity news and gossip, keep coming back to Article Bio.