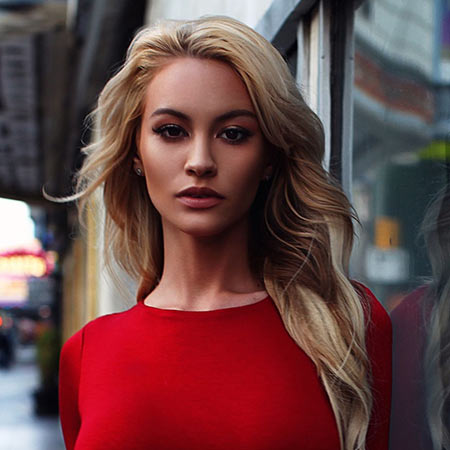 The very talented lady and elegant Bryana Holly is a top fashion model and social media personality from the United States. She is in contract with some of the recognized modeling agencies that include ‘No Ties Management’ San Diego, ‘Wilhelmina Models’ Los Angeles/Miami, and One.1, New York.

Bryana Holly was born on July 12, 1993, in Huntington Beach, California of United States. She was born to the American parents. Regarding her nationality, she is American and belonging to white ethnicity. Her zodiac sign is Cancer.

Bryana Holly has become one of the recognized fashion model and internet sensations today. She earned her recognition by serving and associating with some of the internationally famous modeling agencies. Her achievements as a model are quite appreciable. She was entitled Miss September 2012 from the ‘TransWorld Surf’ magazine. She has featured in the popular American men’s lifestyle and entertainment magazine ‘Playboy’. She also made her appearance on the cover page of lifestyle magazine ‘Fit to Fun’. Hitting many commercials for Southern California lifestyle brand ‘Fede Swimwear’ she has marked her place in the fashion industry. Furthermore, she also appeared in the ads of Solkissed swimsuits.

Bryana Holly also landed her steps in the world of acting with 3-minute short musical video ‘Zeds Dead: Collapse’. It was directed by Danny Sawaf and released in the United States, on May 18, 2015.

Bryana Holly was romantically in an affair with reality television star Brody Jenner in 2013. They dated for four months. During their relationship, they were spotted together many times including when the couple was spotted making love out in the sunny paradise beaches of Hawaii. The couple broke up after their four months relationship. According to sources, she split with her boyfriend after a fight at the annual Playboy Mansion Halloween party in Los Angeles, California in 2013 and they stopped following each other on the social networking sites.

In October 2014, she was seen with popular American film actor and producer Leonardo DiCaprio. Upon broke up with Brody Jenner, she started dating Ashton Irwin, who is the drummer of the Australian rock band from Sydney called ‘5 Seconds of Summer’.

Bryana and Ashton have been famous for their on-again-off-again relationship since they were spotted together hand in hand in 2015 at Coachella music festival. After some months, Bryana revealed that she was not dating Ashton through NOVA 96.5 FM, Later on, Ashton mentioned the fact that she is single.

In 2016, she was rumored to be in an affair with a German-Russian D.J and Musician, Zedd.

Bryana Holly has a distinctive body figure and measurements of 34-24-35. The color of her hair and eye is Blonde and Dark Brown. she is definitely making a lot in finance, though her net worth is still unknown to the public.