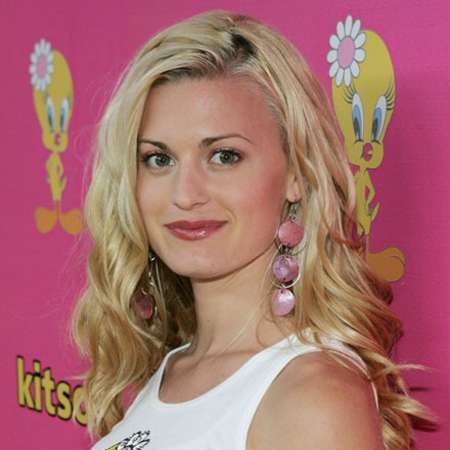 Brooke D’Orsay, a Canadian actress, is best known for voicing the character of Caitlin Cooke on the Canadian animated series, 6teen (2004-10) and Brooke Mayo on King’s Ransom. She is also known for her portrayals of Paige Collins on Royal Pains and as Kate in Two and a Half Men. She played Deb Dobkins, the dead alter ego of the main character Jane Bingum on the Lifetime original series Drop Dead Diva, and was in the Nickelodeon movie The Boy Who Cried Werewolf as Paulina Von Eckberg.

She has appeared in few films and TV series including King’s Ransom, Room 10, Big Bang Theory, and How I Mate Your Mother. In 2017, she appeared in a TV movie, Miss Christmas, and made a guest appearance in a TV series 9JKL.

Brooke D'Orsay was born on February 17, 1982, in Toronto, Ontario, Canada. She is the origin of Huguenot. D'Orsay was born to mother Jackie D'Orsay and father William D'Orsay. As far as her ethnicity is concerned, Brooke is White and holds American nationality. She follows Christianity.

Her father William was a local University professor and her mother, Jackie, was a chemical lab a s sistant. D'Orsay has a brother, John D'Orsay who is a rock band guitarist.

The family was that a middle-cla s s home and she grew up there. She attended the local high school and graduated at the age of 16.

In 2001, Brooke D'Orsay appeared in a Canadian comedy film Why Can’t I Be a Movie Star. Then, she appeared in a short film Truths of Insanity.

In 2002, she appeared in another Canadian film 19 Months and Fortune’s Sweet Kiss. Following year, she appeared in a short film, Home Security, and the feature film The Republic of Love. In 2004, she featured in a comedy film King’s Ransom. Her last film was a 2006 romcom movie It’s a Boy Girl Thing.

In 2002, Brooke D'Orsay made her television debut from a TV series Doc starring Billy Ray Cyrus.  She appeared in an episode of the series. Then, she also made a guest appearance in two series Soul Food. The same year, she featured in a TV movie Everybody’s Doing It.

Next year, Brooke D'Orsay enacted two television films and one series. In 2004, she was a part of the TV film, Then Comes Marriage. She also appeared in an episode of tv series Medical Investigation.

From 2004-10, she was a part of the animated series 6teen. She voiced the character of Caitlin Cooke. In 2007, she featured in few episodes of Two and a Half Men and The Big Bang Theory.

From 2009-11, she appeared in a recurring role in the soap opera Drop Dead Diva. In 2010, she began appearing in a new show Royal Pains.

She has also appeared in several roles in the television fraternity. She portrayed the role of Ellen on Doc, Felicity Fury on Ace Lightning, Justine on soul Food, Eve Kindley on Beautiful Girl, Heather Robbins on Wild Card, Robin on Two and a Half Men.

Her other notable credits are; Christy on The Big Bang Theory and Margaret on How I Met Your Mother. Her other minor television roles include acting on Everybody’s Doing It.

How Did Brooke Earn $3 Million? Find Her Earning, Source Of Income and Properties

According to celebrity net worth, Brooke D’Orsay’s net worth is $3 million, in 2019. She has earned this figure from his longtime career. The average salary of the actor in the USA is around $50 thousand, so he also might be getting his salary in the same range.

In the year 2004,  the actress was a cast in the movie Harold & Kumar Go to White Castle which grossed over $23 million against $9 million. The movie starred Kal Penn, John Cho, and Paula Garcés.

D'Orsay has appeared in the movies and television series such as It's a Boy Girl Thing, Room 10, King's Ransom, Harold & Kumar Go to White Castle, 9JKL, Two and a Half Men, Royal Pains, The Boy Who Cried Werewolf, Drop Dead Diva, Gary Unmarried, How I Met Your Mother and The Big Bang Theory.

D'Orsay received a nomination for Gemini Award for 6Teen. She has been found to be active on social networking sites like Facebook and Twitter and her very own wiki page contains further more information regarding her that can be accessed by fans around the world.

In June 2014, that she and her then-boyfriend Coolidge sold their Hollywood Hills West Home for $2.16 million. The 2,419 square feet amazing property features three bathrooms and three bedrooms. Her boyfriend originally bought the house for $2.009 million according to public records, in 2006.

What Is the Relationship Status Of Brooke D'Orsay?

Brooke D’Orsay is an unmarried woman. She is not dating anyone (publicly). She has been in the limelight on movies and television for a long time but she chose to keep her relationship a secret.

Previously, Brooke D'Orsay dated actor/ director Greg Coolidge for a few years. But, she kept her relationship under wrap until August 2012. As per some online sources, the couple was planning to get married. They have not made any public appearances since 2015.

According to some online sources, Greg is her husband and now living happily. However, they have not made their married official.

Greg, an American actor, producer, and director who has worked for the big screen since 1995 has been supportive of his girlfriend since the very beginning of her career. Brooke even went on to say that she was proud of the accomplishments of Greg.

D'Orsay has a height of 5 feet and 5 inches and weighs 50 kilograms. She has maintained the perfect body posture and her body measurement size is 34-25-34 inches. She has blonde hair color and has beautiful green colored eyes.