Brian Shaw is an American professional strongman competitor. He is famously known for winning the World's Strongest Man title of 2011, 2013, 2015, and 2016. Brian is the only man ever to win the Arnold Strongman Cla s sic and the World's Strongest Man in the same year. He is also notable for his Youtube channel SAWSTRENGTH, which has more than 1.14 million subscribers, as of 2019. Apart from a successful professional life, Brian also leads a pretty decent love life. He has been married to Keri Shaw since 2015. Moreover, he also has a child with his wife. Here are some interesting details about Brian's personal and professional life, including his early life, education, and a lot more.

Brian Shaw was born on February 26, 1982, in Fort Lupton, Colorado, the United States. He belongs to the white ethnicity and holds an American nationality. His zodiac sign is Pisces.

Shaw was born to Jay Shaw (father) and Bonnie Lifter Shaw (mother). His father's height is 6 feet 1 inch while his mother stands at 5 feet 11 inches.

After graduating college, he went on to attend Black Hills State University where he was on a full basketball scholarship. He earned a degree in wellness management from the University.

Brian Shaw, 37, started his career professionally as a strongman by winning the Denver Strongest Man contest, in October 2005. In the following year, he went on to join the professional ranks too. Shaw's biggest triumph came when Shaw qualified for the finals at the World's Strongest Man in September 2010. He, however, did not win the title after his opponent Zydrunas Savickas defeated him by countback.

In 2011, the strongman again participated in the World's Strongest Man competition and tied with two-time champion Savickas with the history being changed by Brian after beating Savickas to win the competition.

Besides, Brian also has a considerable fan following on his YouTube Channel SHAWSTRENGTH with over 1.14 million subscribers, as of 2019.

How Much Is Brian Shaw Net Worth?

Strongman competitor, Brian Shaw, 37, has acc u mulated a net worth of $1 million as of December 2019. He has made such a good amount of money from his career as a strongman and YouTube Channel too.

The 6 feet 8 inch-tall, Brian Shaw tied the knot with his long-time partner Keri Jenkins on July 4, 2015. The couple organized their wedding ceremony at the Estes Park Resort, Colorado, United States. His spouse is an algebra teacher and owner of Fit Mommy Academy. 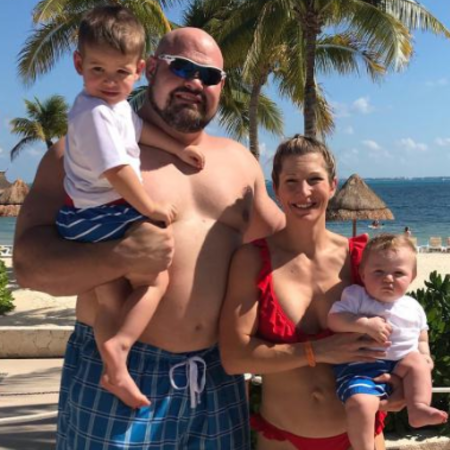 Brian and Keri with their two children SOURCE: Marriedceleb

In 2014, the lovebirds first met with each other at Keri's gym event. After some time, the couple started dating. Brian popped the question to his then-girlfriend Keri in her hometown Harrisburg, Pennsylvania.

They welcomed their first child, a son, Braxton Shaw on June 15, 2016. Their second child, a son named Kellen James Shaw was born on May 3, 2018. The couple is living a blissful married life in Brighton, Colorado with their two kids.