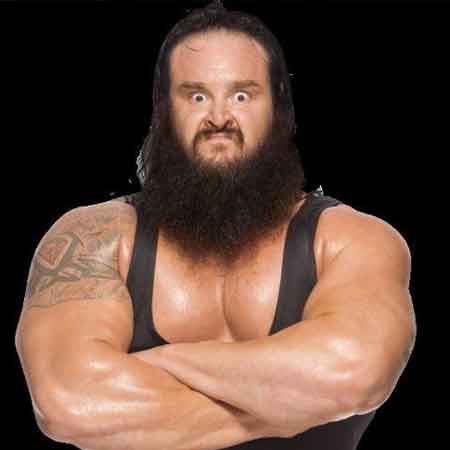 Adam Joseph Scherr, better known by his stage name Braun Strowman, is a wrestler who plays in WWE and has gone through several ups and downs. Strowman, who played football, track and field, and wrestling during his high school days, later chased a career in wrestling.

Braun Strowman was born Adam Scherr on September 6, 1983, in Sherrills Ford, North Carolina. As of 2018, he is 35 years old. He was born to father Rick "Crusher" Scherr, who is one of the greatest slow-pitch softball players of all time. His mother's name is unknown yet. He has a younger sister, Hannah Scherr. He belongs to the White American ethnicity and is an American by his nationality. After spending his childhood in his hometown, he relocated in Arkansas and Tennesee.

Strowman attended Bandys High School, where he was a part of the football, track and wrestling teams. He joined the community college after a few years of gap following his graduation in 2003.

Strowman did multiple jobs before he kicked off his WWE career. When he was attending community college, he worked as a doorman and a mechanic. Although he was dedicated to his work, the minimum paying jobs were barely enough to support him. During that time, he also played semi-professional football for Hickory Hornets.

He attended a scouting program for the NFL, however, he didn't work for long here. Strowman also competed in a few strongman competitions before starting a professional career in wrestling.

He signed a contract with the professional wrestling promotion WWE in early 2013 and was sent to the WWE performance center in Florida to train until 201 5. He started his WWE career with NXT live events. Then, he appeared in the main event where he defeated an unidentified wrestler.

In 2014, he made an appearance as one of Adam Rose's Rosebuds in his Exotic Express gimmick. He made his professional wrestling debut on December 19, 2014, when he took to the ring against Chad Gable and defeated him.

In 2016, he was drafted to Raw while Bray Wyatt and Erick Rowan were drafted to SmackDown. From this moment, Strowman began his solo career in wrestling. The injury was legitimate but was minor and the recovery time was actually shorter than given by the WWE. This was done to give an element of surprise when Strowman would return 2 months early. He then joined the Miz's feud and failed in his pursuit for the title.

After this, he went on to compete in the tag team championship and was allowed to compete in the Wrestlemania 34 as long as he found a tag team partner. He chose a WWE planted 10-year-old fan at the event and single-handedly defeated Cesaro and Sheamus making the fan the youngest ever to win any sort of WWE title.  Most recently in 2018, Strowman defeated Baron Corbin in a TLC match which earned him a Universal Championship match against Brock Lesnar at the Royal Rumble.

Strowman's career reached the peak after he fought against the wrestlers like Dwayne 'The Rock' Johnson. Up to now, he has gathered a net worth of $1 million which is similar to another WWE wrestler Jinder Mahal.  According to some sources he earns a staggering salary of $350,000 a year.  He owns a 2014 Chevrolet Camaro costing $24,755 along with BMW and Toyota cars.

Also See : How Much is Ric Flair's Net Worth? Know about his Salary, Career, and Awards

As of 2018, wrestler Braun Strowman is unmarried. As per some YouTube videos, Strowman has a girlfriend Camilia who is also originally from North Carolina. The video reported that they have a serious relationship and have introduced themselves to each other's families.

They met through the wrestling business as his girlfriend was an upcoming wrestler. They started dating after a few meetings and now, they are in a committed relationship, however, they haven't taken their relationship to the public.

Once, Braun Strowman was rumored that he and Charlotte Flair, a daughter of renowned American wrestler Ric Flair were dating. Charlotte Flair recently competed in a TLC Triple Threat Match against Becky Lynch and Asuka. The rumor faded away after none of them addressed it.